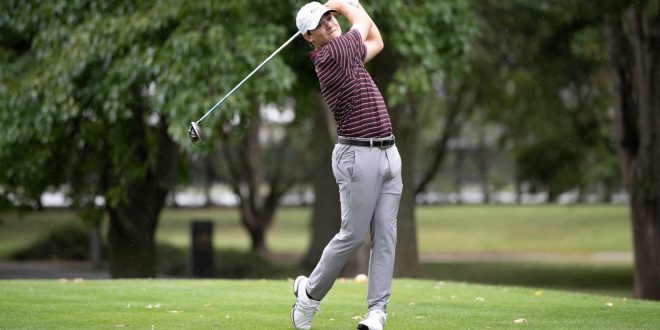 Men’s Golfers in Ninth After Day One at K-State

MSU finished the day in ninth place of13 participating teams, though the Bears did rank second among the four Missouri Valley Conference teams in the Little Apple.

Graduate transfer and Springfield native Alex Locke, who tied for sixth in the field with eight birdies on the day, shot a plus-4 total of 73-75-148, good for the 14th spot in the 75-player field.

“Alex was tough today,” MSU head coach Neal Stafford said after the second round. “We made some birdies but had a few too many big mistakes that were tough to overcome. The course is very challenging and will play different tomorrow with different winds. Hopefully we can adjust and make a move up the board.”

The Bears’ Max Kreikemeier ranked fifth in the field in par-5 scoring at five-under and finished with a 76-76-152 to tie for 30th with teammate Eric Schuessler, who went about his 75-77-152 a different way by leading the field with 24 pars.

Carter Lee holed seven birdies on the day and sits in 49th after an 81-75-156, while JP Lavalle completed the lineup with a score of 163, bouncing back to shoot 78 following a tough first round.

The third and final round of the tournament begins at 8:30 Tuesday morning.