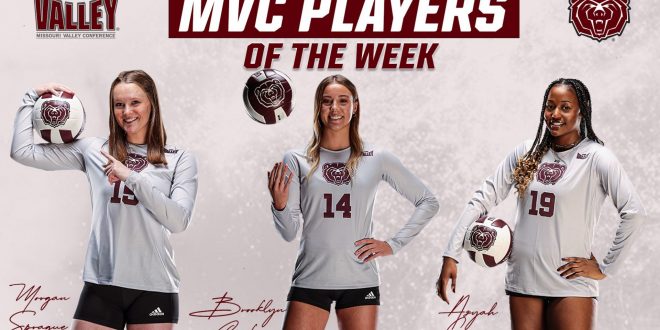 St. LOUIS – After picking up a trio of 3-0 victories at the Dr. Mary Jo Wynn Invitational in Springfield over the weekend, the Missouri State volleyball team had another sweep Monday by winning all three Missouri Valley Conference weekly awards.

Brooklyn Cink is the MVC Player of the Week, Azyah Green is the Defensive Player of the Week, and Morgan Sprague earned Freshman of the Week honors. The last time any school swept the Valley’s three weekly accolades was on Oct. 10, 2011, when Missouri State’s Carly Thomas, Ashley Mason and Olivia Brand collected the awards.

Cink brought home tournament MVP honors after hitting .411 with averages of 3.38 kills, 0.75 aces, 2.88 digs, 1.00 blocks and 4.69 points per set. Sunday versus Saint Louis, Cink collected a double-double with 12 kills and 10 digs, hitting .522 without an error while adding two aces and two blocks. The junior outside hitter from Manhattan, Kan., served four aces to go with six kills on .364 hitting, five digs and a block in Friday’s sweep of Louisiana Monroe, and hit .318 with nine kills, eight digs and five blocks on Saturday versus Tulane.

The award is the first of Cink’s career, though she was named the league-wide MVC Performer of the Week on Sept. 22, 2020.

Green dominated at the net all weekend to the tune of 2.00 blocks per set, anchoring a Missouri State defense that limited the opposition to .119 hitting in three victories. She also hit .383 with 2.44 kills per set on the offensive side.

The junior middle blocker from Springfield had six stuffs in each match during her all-tournament performance and went for seven kills on .538 hitting against Saint Louis, 10 kills on .389 hitting versus Tulane, and five kills on .250 hitting against ULM. This is Green’s second career MVC Defensive Player of the Week honor.

Sprague steered the Missouri State offense to a .334 attack efficiency in the three sweeps, averaging 10.89 assists, 2.44 digs and 1.00 blocks per set. She also had five kills on .500 hitting and two aces to earn all-tournament honors.

Friday against ULM, Sprague had 30 assists, five digs, three kills and three blocks while guiding the Bears to a season-high .354 hitting percentage. Saturday, the Ballwin, Mo., product had 32 assists, three digs and three blocks in a sweep of Tulane, then finished the weekend with 36 assists, 14 digs, three blocks and two aces against Saint Louis on Sunday. The Bears hit .324 against the Billikens, MSU’s third consecutive match above the .300 mark. Sprague is the first Bear to earn MVC Freshman of the Week honors since Amelia Flynn in 2018.

The Bears (7-2) have won five consecutive matches and 14 straight sets, and conclude non-conference play Sept. 17 and 18 at the Jayhawk Classic, where they will play Albany, Kansas City and host Kansas.