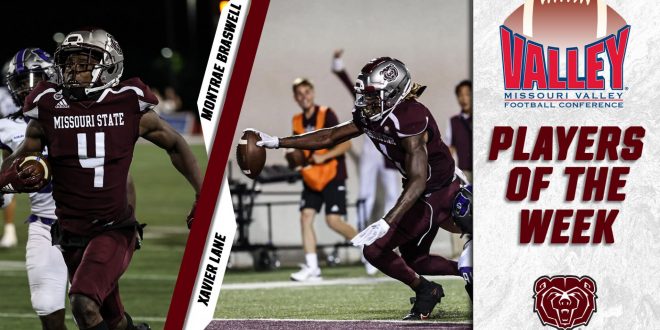 Lane, a wide receiver from Montgomery, Ala., racked up 148 yards on nine receptions in the win, the most receiving yardage by a Bear wideout since 2018. His biggest catch of the day was a 26-yard catch and run to the end zone with 29 seconds left in the game to give the Bears the lead for good.

The transfer from Western Kentucky is also Missouri State’s second MVFC Newcomer of the Week in as many games, joining fellow Bear Jason Shelley who earned the honor last week against Oklahoma State.

Braswell, a cornerback from Avon Park, Fla., had one of the Saturday’s most electrifying moments when he erased a Central Arkansas lead with a 96-yard kickoff return with just over three minutes to play. The dash down the near sideline was Braswell’s second career kickoff return for a TD. He also tallied three total tackles and two solo stops in the victory.

Joining the MSU duo on this week’s list of conference honorees is UNI linebacker Spencer Cuvelier, who took home MVFC Defensive Player of the Week laurels.

The Bears (1-1) will have next weekend off before returning to action on Sept. 25 with a home matchup against South Dakota in the conference opener for both teams. Kickoff for the Family Weekend matchup will be 7 p.m. (Central) with tickets available now at MissouriStateBears.com or at the Old Missouri Bank Box Office, (417) 836-7678, during regular box office hours.