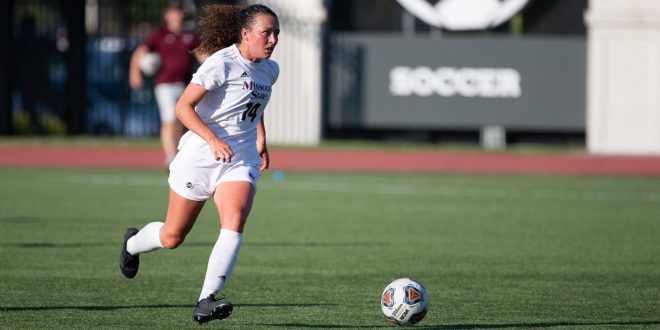 The six-match unbeaten streak is the longest by a Missouri State team since 2019, and the Bears’ 3-0-1 start at home is the best start since 2014 when they won four-straight on their home turf.

“I thought it was a pretty even game,” head coach Rob Brewer stated. “Taking 15 shots was definitely a plus for us. Sierra (Fury) had a fantastic goal. We are still undefeated in the last six contests and undefeated at home. Right now, we are trying to take lessons learned from today and apply them to MVC play.”

The Bears got on the board in the 41st minute of play when Sierra Fury’s right-footed rocket found the back of the net from 25 yards out to give the Bears the early lead. Assisting Fury on the goal was Maddie Augustine and Grace O’Keefe. The goal was Fury’s first of the season and second of her career. O’Keefe’s assist was her fifth of the season, which leads all MVC players by two.

The Bears controlled most possessions and suffocated the Mavericks defensively in the first half, as UNO got just one shot off and one corner kick the entire period. Missouri State entered the break with the lead for the third time this season.

The Bears came out firing in the second half with three shots while putting two on goal, but UNO keeper Mia Reedtz Rehde Olesen was able to make the saves.

In the 87th minute, the visitors tied things up off a free kick when Andrea Daves lofted a pass into the box to Cece Behrens who out jumped the MSU defenders and headed the pass into the net for her first collegiate goal.

“We got on our heels a little bit as the game wore down,” Brewer added. “We gave them a couple opportunities and they got one off the free kick. Credit to Omaha for hanging in there against us.”

With the score tied 1-1 the Bears entered overtime for the third time this season.

Omaha (3-2-2) put two shots on goal during the first overtime period but Katherine Montgomery was able to corral them both to the keep the tie intact. Anna Durnin and Kaeli Benedict both sent shots towards the Mavericks net, but Reedtz Rehde Oelsen denied both.

Grace O’Keefe added two shots on goal in the final minutes of the second overtime but neither got past Reedtz Rehde Olesen, and the Bears garnered their third tie of the season.

The last double overtime draw at home was a scoreless match with Loyola on Feb. 18, 2021.

Both goalkeepers were solid in their 110 minutes of action. Montgomery recorded five saves while, allowing one goal for Missouri State. The Mavericks’ Reedtz Rehde Olesen tallied eight saves with one goal allowed.

Missouri State is back in action on Friday, Sept. 17, when the Bears travel to Carbondale, Ill. to open MVC play against Southern Illinois. Kickoff is scheduled for 6:30 p.m. (CT).