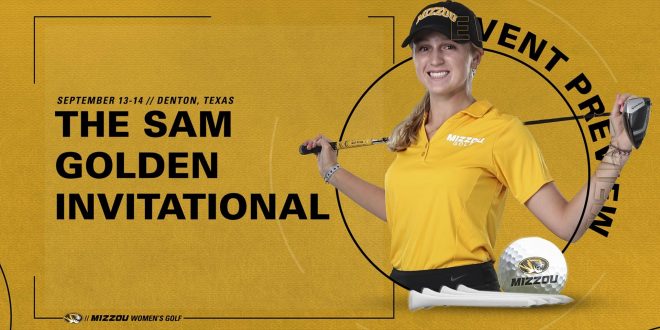 DENTON, TX – Mizzou Women’s Golf heads down to the Lone Star state this weekend to tee off in their fall season opener, the Sam Golden Invitational. The University of North Texas-hosted event features two full-packed days with back-to-back rounds for a collective 36 holes being played on the first day and the final 18 closing the event on the second. The Tigers return four starters to the lineup in addition to the debut of freshman Hallie Kuhns. The competitive slate includes 14 other teams:  Charlotte, Houston, Kansas State, Mississippi State, Oklahoma, Oklahoma State, Purdue, Texas Tech, TCU, Tulsa, Tulane, Texas A & M, UTSA, University of North Texas.

WHERE: The event will take place at the Wildhorse Golf Club at Robson Ranch (Par-72, 6,288 yards) in Denton, Texas.

WHEN: The two-day event launches on Monday, Sept. 13 featuring two consecutive rounds with the final round wrapping up on Tuesday, Sept. 14.

FOLLOW: Live results and scores will be available here.

After being featured in the lineup for six tournaments last year as a freshman, Emily Staples (Orlando, FL.) returns to kick-off the year in the headlining spot for the Tigers. She closed out the spring on a high note by carding her season-best 54-hole event score of an 8-over 224 at the SEC Championship and looks to carry that momentum into this season.

Slotted in the second spot for Mizzou is junior Sophia Yoemans (Redwing, Minn.). She ended last season with a 76.6 season scoring average after also playing in six of the team’s matches.

Making her career debut this week is freshman Hallie Kuhns (Austin, Texas). The newcomer enters the collegiate golf world with four American Junior Golf Association Top-5 finishes under her belt from the 2019 and 2020 seasons in addition to a pair of first place individual titles at high school events, the Lakeapalooza and the Viper Classic.

Noelle Beijer (Assendelft, The Netherlands) starts off her fifth year in the fourth spot this week. After competing in all events last year for the team, Beijer sunk the second-most birdies on the team for the season with 51 and ended the season with a scoring average of 75.57.

Representing the Tigers in the final spot is junior Bri Bolden (Mokena, IL.) whose best performance last season was at the University of North Texas-hosted spring event, the Bruzzy. Bolden fired her season-low event score of a 4-over 220 which was anchored by posting a 2-under 70 in her final round.

Rounding out Mizzou and competing as an individual in this week’s event is senior Keagan Dunn (Braselton, Ga.).