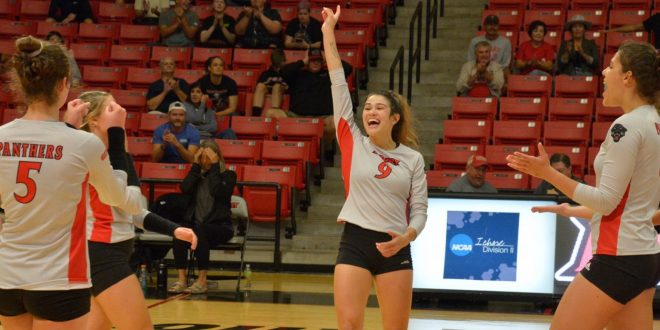 Drury bounces back from five-set loss to defeat Alaska Anchorage

FAIRBANKS, Alaska— The Drury Panthers bounced back from a heartbreaking five-set loss to California State-Los Angeles to defeat Alaska Anchorage in four sets to end the Alaska Nanook Classic on Saturday in Fairbanks, Alaska.

Drury went 2-2 in the tournament and ended the event with a 6-2 overall record. California State-Los Angeles improved to 4-3 while Alaska Anchorage fell to 7-5.

The Panthers went five sets for the second-straight game as California State-Los Angeles came from two sets down to win in five. Drury had a 12-8 in the fifth, but the Golden Eagles ran off five points in a row to take a 13-12 lead, then closed out the match taking two of the last three points. Ali Jansen led the Panthers with 11 kills, while Juliana Squire and Makina Wratten had 10 each. Kallie Fenscke had 26 assists and 10 digs, and Emma Fox added 24 digs.

The Panthers ended the tournament with a win over Alaska Anchorage. Drury dropped the first set, 25-20, then recovered to win the next three sets, 25-22, 25-18, 25-19. Juliana Squire had a team-leading 10 kills and added 12 digs, while Kallie Fenscke distributed 18 assists and had five service aces.

Drury returns to the continental United States and will open Great Lakes Valley Conference play on Thursday when they play Southwest Baptist at 7 pm in Bolivar, Missouri.