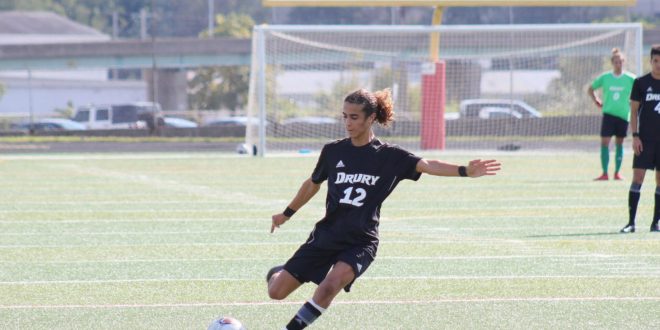 FAYETTE, Iowa– Upper Iowa scored midway through the second half to edge Drury 1-0 on Friday in Fayette, Iowa. The win gives the Peacocks a 3-0 start to their season, while the Panthers fell to 0-3, with each of their losses coming by a single goal.

The game was scoreless until Stan Cargill broke through for the game’s only score in the 71st minute. Cain Smith and Daniel Pranger both received assists on Cargill’s second goal of the season.

Drew Finley got his first collegiate start in goal for Drury and saw 13 shots while making three saves. Upper Iowa goalkeeper, Alejo Prieto, was credited with the shutdown win.

Jayd Hamdaoua, Adem Hamdaoua, and Jakob Limpert were all credited with shots for the Panthers.

All three wins by Upper Iowa have come against Great Lakes Valley Conference opponents. The Peacocks have claimed wins against the Panthers, Missouri-St. Louis, and Truman State.

Drury returns to action on Sunday in their GLVC opener as they take on Truman State at noon in Kirksville, Missouri.