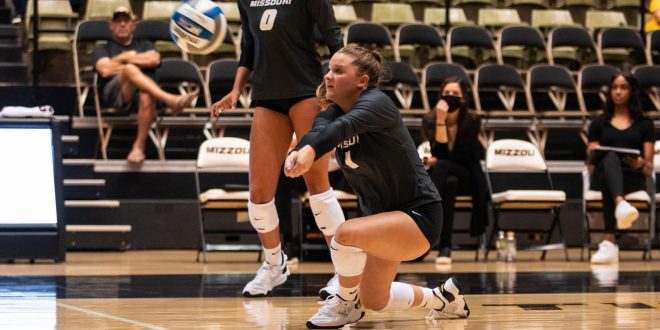 Mizzou Falls in Pair of Close Affairs at UniWyo Invite

LARAMIE, Wyo. – Mizzou volleyball (2-6) dropped a pair of tight matches to Northwestern and UCSB on the first day of the UniWyo Invite.

Junior Anna Dixon led Mizzou with double-digit kills in both matches. Libero Emily Brown added double-digit digs in each match as well for the Tigers.

Strasser produced her best performance yet as a Tiger, adding five blocks to her six kills. Burbage was just behind with four rejections.

In three tight sets, Northwestern’s experience showed as it pulled away just enough in the late points to put away the Tigers. In the first frame, Mizzou trailed 21-20 before the ‘Cats finished on a 4-1 run. In the third, Northwestern held Mizzou at bay through extra points before closing the match with the 28-26 win.

The Tigers were paced by Dixon who floored 18 kills in the loss while hitting .378. Mizzou, however, struggled as a team offensively, hitting just .151 for the match as UCSB’s block proved troublesome with 11 rejections.

The Gauchos were led by Tallulah Froley and Michelle Ohwobete with 14 and 12 kills, respectively.

Mizzou appeared poised to stave of the sweep, reaching set point in the third with a 24-22 lead. After a Gauchos timeout, UCSB reeled off the next three points on its way to the 27-25 clincher.

Mizzou closes the UniWyo Invite against Wyoming in a 7 p.m. CT first serve on Saturday evening. The match will stream on the Mountain West Digital Network.