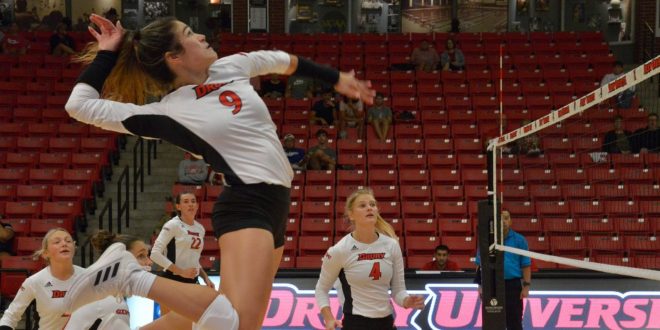 
FAIRBANKS, Alaska— The Drury Panthers split their first two matches in the Alaska Nanook Classic on Friday as they defeated Ursuline 3-0, then were edged in a heartbreaker to host Alaska Fairbanks, who evened their record at 5-5.

The Panthers opened the day cruising to a sweep of Ursuline 25-16, 25-9, 25-19. Juliana Squire led Drury with eight kills, while Gabby Birmingham contributed 21 assists, and Taylor Forth, along with Maddie Baumer, added four blocks.

Drury battled from two sets down to force a two-hour, 38-minute marathon in the night’s final game against Alaska Fairbanks. The Panthers bounced back from losing the first two sets by a combined 15 points to win the third set 25-21. Drury fought off a match point and rallied to win the fourth, 26-24.

The Panthers appeared to take an 11-8 lead in the fifth when a horn sounded as the Nanooks sent a ball out of bounds. Officials conferred after the play for 10 minutes and awarded Alaska Fairbanks the point instead, citing Drury with a rotation error. The Nanooks later fought off two match-points for the Panthers and closed out the match to win the decided set 17-15.

Stat leaders were unavailable immediately after the game.

Drury completes the tournament with two more matches tomorrow. The Panthers will take on California State, Los Angeles at 12:30 pm (CST), and Alaska Anchorage at 8 pm (CST) in Fairbanks, Alaska.