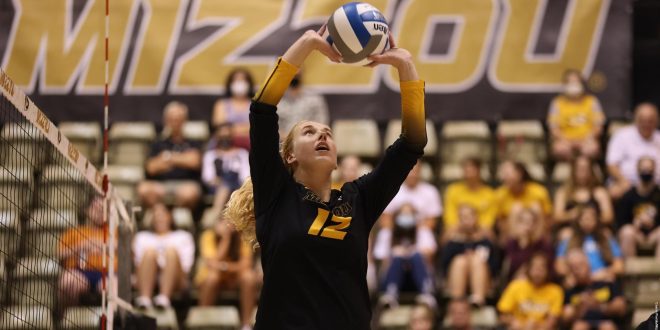 Junior outside hitter Anna Dixon and freshman middle blocker Kayla Burbage led the Mizzou attack in each match, but the young Tigers were unable to match the experience of the veteran-laden Billikens and Roos.

The Billikens used a strong serve to keep pressure on the Tigers, recording 10 aces in the match. SLU’s serve also kept Mizzou out of system, leading to 10 total blocks for the Billikens.

Burbage led all players in the match with five blocks in her debut. She added six kills and three service aces to provide a bright spot for the Tigers.

Another sluggish start saw Mizzou in a 2-0 hole before the Tigers began to rally. Dixon guided the young Tigers in the third set with four kills and seven digs to get Mizzou back in the match with the 25-16 set.

Dixon posted another eight kills in the fourth set but the Roos staved off three Mizzou set points before closing the match with a 3-0 run.

Mizzou faces Creighton in the finale of the Mizzou Invitational on Saturday at 3 p.m. in the Hearnes Center. The match will stream on SEC Network+.