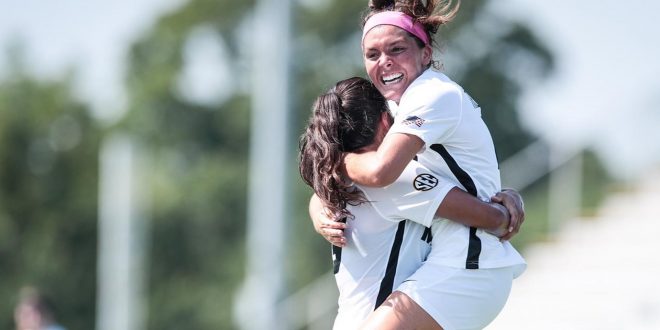 COLUMBIA, Mo. – Senior Julissa Cisneros provided her fifth-career multi-goal effort to lead the Tigers (1-2) to a 3-1 victory over Indiana State (1-2). The win marks Mizzou’s first of the Stefanie Golan era.

The Tigers fired a season-high 27 shots in the contest with 10 of them on goal.

The Tigers found themselves trailing in the early stages after Indiana State put in the first goal from distance into the bottom right corner in the seventh minute.

The Tigers would not trail for long, however, Mizzou earned their first goal of the season after Julissa Cisneros found Macy Trujillo with a through ball down the right side. Trujillo’s initial shot was blocked, but she was able to collect the rebound and put it on goal. The shot seemed to be blocked by the Sycamore defender, but the official determined that it crossed the line.

With the score tied entering the second half, Mizzou turned the pressure on the ISU defense. Macy Trujillo found Leah Selm down the right side, and she sent a low cross in to Cisneros. The senior gathered it and used her left foot to send the ball into the bottom right corner of the net. Mizzou gained their first lead of the season.

Julissa Cisneros added her fifth-career multi-goal match with the brace. She added her 21st and 22nd career goals.

Macy Trujillo scored the first goal of the season for the Tigers to level the score.

Leah Selm and Milena Fischer added their first career points, each assisting of the Cisneros goals.

Stefanie Golan earns her first win as a Missouri Tiger.

Kyla Johnson sent in her first career shot on goal.

Skye Kingsley played her first minutes of the 2021 season with 37. She fired four shots in the contest.