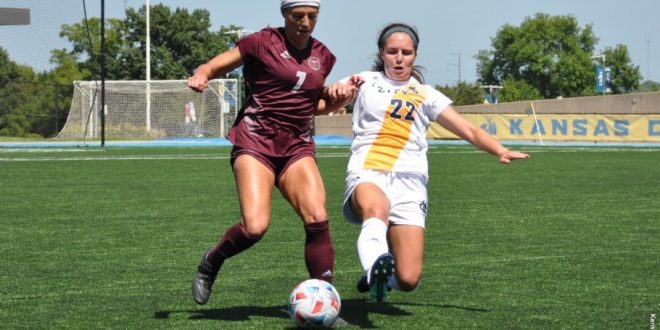 In the opening minutes, Kansas City (1-1-0) came out of the gates with an aggressive defensive press. However, once Missouri State settled in, the Bears put two shots on goal in the first five minutes, courtesy of Anna Durnin and Kennady Orlick. In the 19th minute, MSU created a break-away opportunity off a Kansas City corner kick that resulted in Kate Schroeder sending a shot toward the Roos’ net, but Kansas City’s Natasha Richardson corralled it.

Missouri State then got on the scoreboard in the 44th minute when Schroeder’s header found the back of the net off a set piece with Jade Loftness and Grace O’Keefe assisting. The goal gave the Bears the 1-0 lead going into the break for the second-consecutive match.

Kansas City tied it up in the 68th minute when Angela White’s shot barely snuck by Katherine Montgomery. White’s goal was the Roos’ first of the season and the first of her career. Kassi Ginther’s 78th-minute goal with an assist from Rileigh Kuhns was the eventual game-winner, putting the Roos up 2-1 for good.

Missouri State made a final push in the late goings as Durnin sent a shot towards the goal in the 86th minute, but Richardson made an impressive diving save to deny the Bears and preserve the hosts’ lead. Richardson highlighted the day for the Roos as she recorded eight saves while allowing just one goal.

Overall, Missouri State held the upper hand in shots on goal (9-7), while Kansas City had the advantage in shots (18-12) and corner kicks (8-7). Durnin and Orlick led the Bears in shots and shots on goal as each recorded four shots overall with three on goal. Other Bears who recorded a shot on goal were Schroeder (2) and Kara Privitera (1).

Camielle Day started as the Bears’ keeper. However, she exited the game in the 22nd minute due to injury as Montgomery replaced her. Day made one save while Montgomery made four saves and allowed two goals in 67:49 of action.

“We played a good first half and made good adjustments to start the second half,” head coach Rob Brewer said. “We were in a position where we could have put the game away. Up to this point we have been road warriors. The team is looking forward to getting back to Allison South Stadium to face Arkansas State on Thursday.”

With the loss, Missouri State falls to 7-3-2 all-time against Kansas City.

The Bears (0-2-0) return to Springfield for their home opener against Arkansas State on Thursday. Kickoff is scheduled for 5 p.m., and admission is free for all fans.