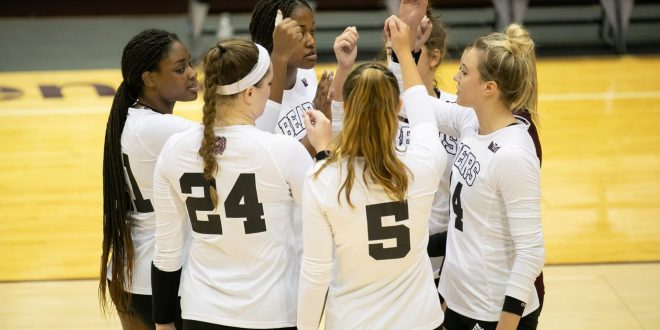 FAYETTEVILLE, Ark. – Missouri State had a chance to test itself in exhibition action Saturday afternoon and dropped a 3-1 decision to Arkansas at Barnhill Arena.

The Razorbacks, who are picked to finish fifth in the Southeastern Conference this season, won by set scores of 25-18, 21-25, 25-21, 25-21. After splitting the first two sets, Missouri State held the lead at the 16-point mark in both the third and fourth periods in the competitive match-up.

“That’s a great Arkansas team we played today,” said second-year head coach Steven McRoberts. “They are well coached and will have a successful season.”

The Bears used 17 total players and a variety of lineups throughout the afternoon, continuing last season’s success at the service line with eight total aces while adding nine blocks as a team.

“Once we got the nerves out I thought we played well,” McRoberts added. “There are definitely some detail things that we can and will do better as the season goes on. We now have a focused list of things to work on this week as we prepare for next Friday.”

Missouri State begins the regular season Friday, Aug. 27, with a 10 a.m. match against Wichita State in Jonesboro, Ark. The Bears also take on host Arkansas State at 7 p.m. on the 27th and Tennessee Martin at noon Saturday to round out the A-State Invitational.