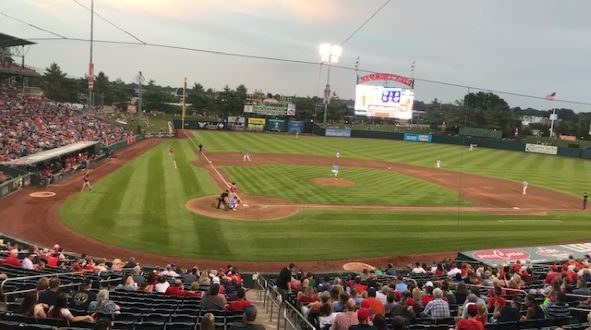 A season record crowd of 5,675 came out on a warm, muggy evening, with many fans sticking around for fireworks after the game.

Springfield got on the board early when catcher Ivan Herrera hit his 14th home run of the season, a shot over the center field wall in the bottom of the 1st inning.

After the Cardinals added a run in the 2nd inning to go up 2-0, the Wind Surge got RBI singles from Spencer Steer and Trey Cabbage in the top of the 3rd to tie the contest 2-2.

Springfield took a 3-2 lead in the bottom of the 3rd on an Irving Lopez RBI single, but Wichita quickly tied the contest 3-3 in the 4th inning on Aaron Whitefield’s run scoring hit.

Springfield third baseman Malcom Nunez drove in the go-ahead run in the bottom of the 4th with a base hit that made it a 4-3 Cards lead.

But it didn’t last as the Wind Surge took the lead for good with two runs in the 5th inning.

A throwing error by Lopez allowed Wichita’s B.J. Boyd to cross the plate with the tying run, then Leobaldo Cabrera’s sacrifice fly gave the Wind Surge a 5-4 lead.

Cabrera clubbed a solo home run to left center in the 7th to extend Wichita’s lead to 6-4.

The Cards got a runner on in the bottom of the 9th, but couldn’t score against Wichita’s Jordan Gore, who earned his second save of the season.

Mitchell Osnowitz (1-2) gets the win in relief for the Wind Surge despite giving up two runs in 2 2/3 innings.

The Wind Surge and Cardinals continue their series Saturday night, with Jordan Balazovic (4-2, 3.74 ERA) taking the mound for Wichita. The Cardinals have yet to announce their starter.