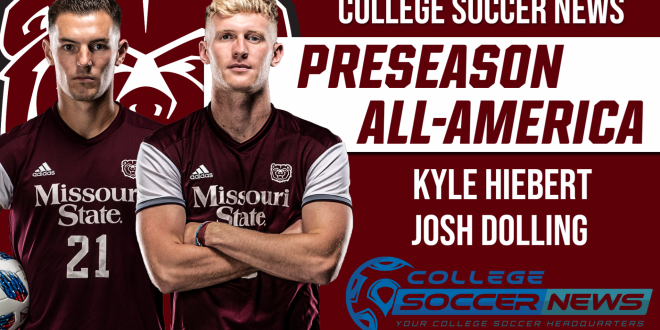 The pair’s selection comes after an impressive 2020-21 season where they helped the team to its second-consecutive Missouri Valley Conference regular season championship. The historic season featured the Bears’ first-ever Sweet 16 appearance before finishing 13th in the nation.

Hiebert (La Salle, Manitoba, Canada) earned a spot on the first team after starting all 14 games of the abbreviated 2021 spring season. He helped lead the MSU defense to a .781 goals against average and post six shutouts throughout the season.

Dolling (Liverpool, England) garnered second-team honors for the Bears after starting in every match he appeared in during the 2020-21 season while logging over 1,000 minutes in MSU’S midfield. He ranked second last season in the MVC in shots on goal with 16 and fourth in total shots with 27.

The 2021 Bears team has gained numerous preseason recognition, coming in at No. 12 in the United Soccer Coaches Top-25 poll earlier this month and being selected as the preseason conference favorite in the MVC Coaches Preseason Poll.

MSU will kick off its 2021 regular season at home against Belmont on Thursday, Aug. 26, at 8 p.m. The game will be broadcast on The Valley on ESPN.