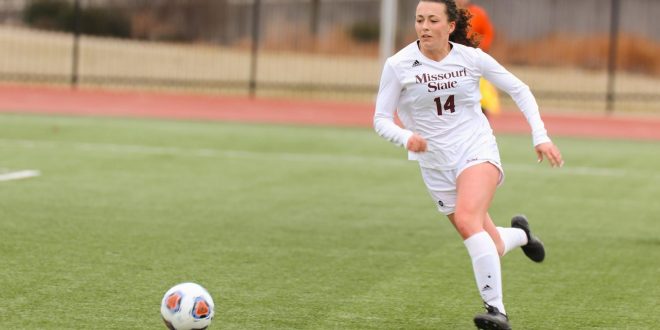 MURRAY, Ky. – A six-goal scoring outburst in the second half by Murray State broke the game open as the Racers defeated Missouri State 6-1, in the Bears season opener here Thursday.

Freshman Grace O’Keefe put Missouri State on the board in the 13th minute when she netted her first collegiate goal off a short pass from Jacqueline Baetz. The Bears were aggressive on the attack out of the gates, sending two shots toward the goal within the first 15 minutes of play.

The Missouri State defense kept the hosts at bay in the first half as the Racers got off just two shots with the lone shot on goal being corralled by keeper Camielle Day. Brewer’s squad held the 1-0 advantage going into the locker room.

Coming out of the break, Murray State (1-0-0) wasted no time knotting things up as senior forward Abby Jones capitalized off a Missouri State clearance attempt in the 46th minute.

The Racers then caught fire netting four goals over the span of six minutes. Chloe Barnthouse gave Murray State the lead in the 54th minute with Jones providing the assist. Morgan Bodker increased the lead by scoring off a pass from Hailey Cole. Jones then added insurance by scoring a pair of goals (59′,60′) to complete the hat-trick, making the score 5-1, in the hosts favor. Audrey Brumfield added the Racers’ final goal in the 74th minute netting a pass from Riley Johnson.

“Congratulations to Murray State,” Head Coach Rob Brewer said. “They were outstanding in the second half. We basically handed them the equalizer when we were up 1-0 which allowed them to take all the momentum from us. That was unacceptable and we have addressed it with the team.”

Missouri State’s (0-1-0) night was highlighted by O’Keefe who led the team with five shots and two shots on goal in addition to her score. For the match, the Bears took nine shots, with four on goal. Sierra Fury, Kate Schroeder, Abby Couch and Genevieve McIntyre all recorded shots.

With the loss the Bears fall to 12-14 all-time in season openers and 3-2 all-time against Murray State.

The Bears (0-0-1) continue their two-match road swing Sunday when they travel to Kansas City for a 2 p.m. tilt with the Roos.