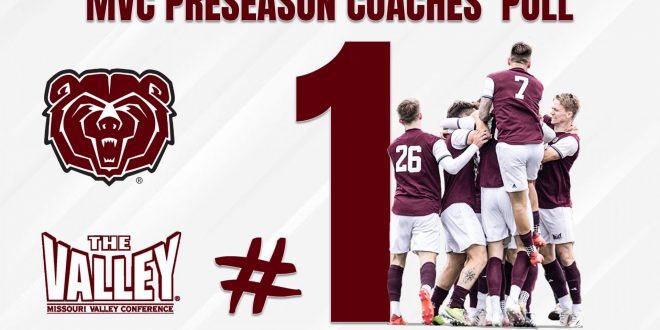 ST LOUIS – The Missouri State men’s soccer team has been picked as the unanimous favorite to win the Missouri Valley Conference championship by the league’s coaches, the conference announced Thursday.

The Bears, who are back-to-back regular-season MVC champions, made history last season with the program’s first-ever Sweet 16 appearance before finishing 13th in the nation.

The team earned all six first-place votes for a total of 36 points. Coming in second was conference rival Loyola with 29 points. Drake (23), SIUE (19), Bradley (10) and Evansville (9) closed out the standings.

“It’s a nice recognition for our student-athletes that the coaches in the valley respect their ability and the work they’re doing,” said head coach designate Michael Seabolt, “But we recognize this is preseason and the result in the matches is ultimately what matters.”

MSU also garnered national preseason recognition, coming in at No. 12 in the United Soccer Coaches Top-25 poll earlier this month.

The Bears return all 11 starters from last year’s 12-2-0 record squad, including three of the conference’s top scorers in Mulatero, Bruseth and Jesus Barea. Mulatero scored seven of the team’s 26 goals in 2020-21, with six coming during the postseason.

The Bears kick off the 2021 regular season at home against Belmont on Thursday, Aug. 26 at 8 p.m. The game will broadcast on The Valley on ESPN.