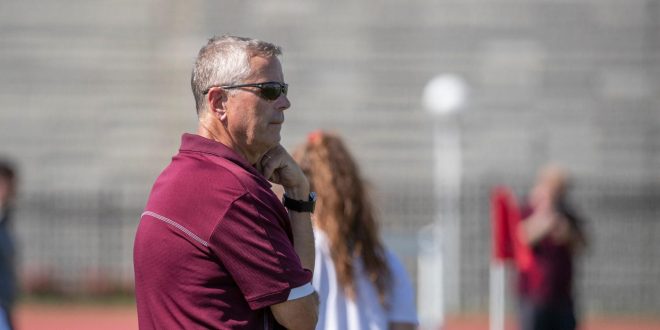 SPRINGFIELD – Missouri State women’s soccer head coach Rob Brewer announced today that he will retire at the end of the upcoming season.

Brewer, who is the only coach in the history of the MSU women’s program, is in his 26th season at the helm.

“I just feel like the time has come,” said Brewer. “One of the hardest parts was seeing how good our freshman class was coming in. Really our depth this year is the best it’s ever been. I don’t think it will hit me until next fall rolls around, but right now I’m happy with the decision. I have spent the last 47 years as a college player and coach, which is a long time. And I’m ready to see what else is out there.”

Missouri State Director of Athletics Kyle Moats noted Brewer’s many contributions to the soccer program and the many lives he touched in his role as the program’s founder.

“Rob has been the only coach our program has ever had,” Moats said. “He has poured his blood, sweat and tears into making Missouri State soccer a perennial contender in the Valley. More importantly, he has influenced the lives of hundreds of student-athletes who have gone on to have successful professional careers and raised families of their own. He has left an indelible mark our program, and we can’t thank him enough for his commitment to Missouri State. We have high hopes for this season, and we know Rob wants to go out on a high note with a great year ahead.”

Brewer started the Missouri State program in 1996 and has helped lead the Bears to NCAA Tournament appearances in 2000 and 2017 in addition to finishing in the top three of the Missouri Valley Conference standings 11 times. Brewer has helped mentor 109 all-conference selections and 82 academic all-conference honorees during his tenure and compiled a 220-200-56 record with the Bears.

The Bears open up the 2021 campaign Thursday at Murray State before traveling to Kansas City on Sunday. Missouri State’s home opener is Thursday, Aug. 26 against Arkansas State at 5 p.m. There will be free admission to all Missouri State home soccer games this season.

Moats also noted that recognition events for coach Brewer will be announced when details have been finalized.