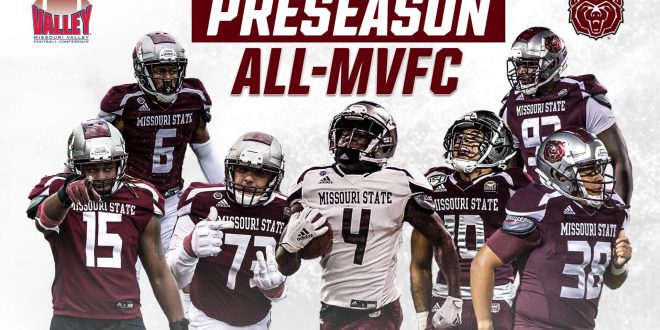 Montrae Braswell, a junior defensive back out of Avon Park, Fla., was MSU’s lone first-team Preseason All-MVFC selection. Braswell was selected to the All-MVFC first team for the 2020-21 season after racking up 41 tackles, 35 solo stops and seven passes defended in seven games played. As a sophomore, he was tied for second in the league with three interceptions and earned MVFC Defensive Player of the Week honors after scoring two touchdowns and recording six solo tackles against No. 21 South Dakota.

Bebee, a junior offensive lineman, was named to the All-MVFC second team as a sophomore. He started the final eight games of the 2020-21 season, seven of which came at guard. Against Valley opponents, Bebee allowed just one sack and six pressures in 401 conference snaps.

A senior from Fort Worth, Texas, Ellis also earned All-MVFC second team honors for the 2020-21 season. A Bear co-captain as a junior, Ellis started nine games at defensive end and led the team with eight tackles for loss and six sacks on the year. He was named MVFC Defensive Player of the Week after forcing a fumble, recording a 30-yard interception return, and collecting a pair of sacks and six total tackles against Western Illinois.

Johnson, a redshirt senior defensive lineman, started all 10 games in the 2020-21 and extended his playing streak to 42 consecutive games. Last season, he was selected to the All-MVFC second team after collecting 27 total tackles, six TFL and 1.5 sacks. He also recorded three tackles and assisted on a TFL in the Bears’ NCAA FCS Playoff game at North Dakota.

McDonald, a senior safety out of Madison, Ala., earned second-team All-MVFC honors in his first season with MSU in 2020-21. In six games played, McDonald racked up 41 total tackles which tied him for the third-most tackles on the Bears defense. He also led the Bears with 35 solo tackles in conference play. With an average of 6.8 tackles per game, McDonald ranked 19th among all Valley defenders as a junior.

Wiltz, a senior linebacker from Breaux Bridge, La., led the Bears last season with 80 total tackles and 51 solo stops. Wiltz earned second-team All-MVFC honors after ranking 10th in the Valley with 7.3 tackles per game in conference action. His seven tackles for loss last season ranked third on the Bears defense and tied for ninth-most in the Valley. He was named MVFC Defensive Player of the Week after recording 12 solo tackles, three TFL and a QB hurry against Youngstown State. Wiltz recorded five total tackles and a TFL in the Bears’ NCAA FCS Playoff game at North Dakota.

Missouri State was also picked sixth in Tuesday’s MVFC preseason poll, which is the school’s highest selection since 2010, when the Bears were picked to finish fifth in the conference.

South Dakota State received 24 first-place votes and 454 total points to earn the title as preseason conference favorite, just head of North Dakota State with 18 first-place votes and 435 points. North Dakota (357), Southern Illinois (345) and Northern Iowa (311) rounded out the top five, the latter two of which were defeated by the Bears during the spring.

In his first year at Missouri State in 2020-21, Bears head coach Bobby Petrino earned MVFC Coach of the Year and led MSU to a 5-1 conference record, a national ranking as high as No. 12 in the national FCS polls, and the team’s first NCAA Playoff appearance since 1990. He returns 18 starters from a squad that earned a share of the MVFC regular-season title.

Bears fans may secure 2021 season tickets by calling (417) 836-8899 or emailing DuaneMiller@missouristate.edu. The season ticket interest form may also be submitted to guarantee reserved seats for every home game in the upcoming campaign.  Season ticket prices for the five-game home slate are $125 for chairback seats; $100 for bleacher-back seats; and $60 for bleacher seats.