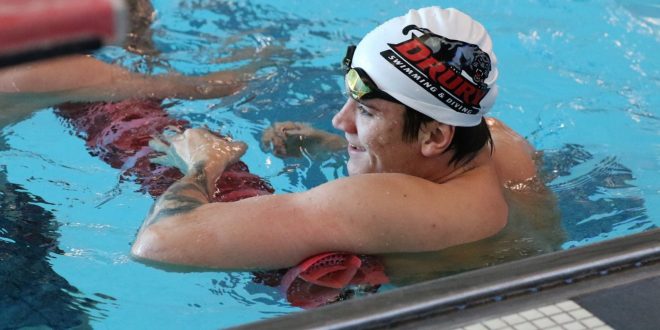 Ostrowski, who was a freshman for the Panthers last season, swam the opening leg for Poland as the team finished sixth in their heat and 11th overall with a time of 3:13.88. Ostrowski posted a time of 48.67 in his portion of the relay as his team finished just 0.75 seconds short of advancing to the event’s finals on Monday.

Ostrowski won five NCAA-II titles for the Panthers last spring, including a national championship in the 100-yard Freestyle, and he helped Drury to a national runner-up finish at the NCAA-II meet in Birmingham, Alabama.

The Strachochin, Poland, native was the Great Lakes Valley Conference Freshman of the Year, and Freshman/Newcomer of the Year for Drury Athletics in 2021. He tied for first in the 100-meter Freestyle at the Polish national championships with a time of 48.72, helping him earn a spot on the national team.

Early last season, Ostrowski set an NCAA-II record in the 50 Free with a time of 19.09, a mark that was ranked in the top three in all of collegiate swimming for most of 2020-21.

Ostrowski’s appearance marks the second-straight Olympic games that Drury has had a swimmer compete on the world stage. In 2016, Drury women’s swimmer Katya Rudenko competed for Kazakhstan in the 100 Backstroke at the Summer Olympic Games in Rio de Janeiro, Brazil.