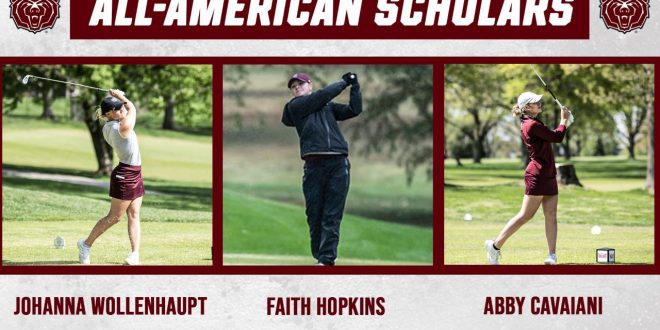 Three members of the Missouri State women’s golf team have been honored by the Women’s Golf Coaches Association for their achievements in the classroom. Abby Cavaiani, Faith Hopkins and Johanna Wollenhaupt have been named All-American Scholars by achieving a minimum 3.50 grade-point average in the classroom and are among over 1,400 women’s collegiate golfers across all divisions to earn such an honor.

For Cavaiani, the award is another in a long list of honors, both on and off the course. She’s a two-time Missouri Valley Conference Scholar-Athlete of the Year and has earned this All-American Scholar Award twice previously. She also was MVC Player of the Year in 2000, conference medalist in 2019, and runner-up this past spring. The junior from Wales, Wis., has maintained a 3.99 GPA while majoring in Business Administration/Management.

A junior from Bartlesville, Okla., Hopkins just completed her first year with the Bears after transferring from Oklahoma State. She sports a 3.68 cumulative GPA while majoring in Marketing. Hopkins played in 21 rounds and averaged 80.38 for the Bears this past season.

Wollenhaupt is a sophomore from Hamburg, Germany who garnered her first All-American Scholar honor, compiling a 3.74 GPA and majoring in Marketing. She ranked third on the team with a 77.94 scoring average this past season.

The three Bears and their teammates will open the 2021-22 season Sept. 13-14 at the MSU/Payne Stewart Memorial at Twin Oaks Country Club in Springfield.