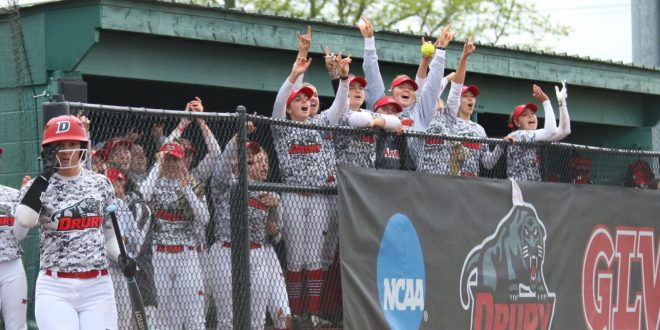 “This is a solid recruiting class of performers with championship-level experience and leadership,” said Breaux. “This terrific class will boost a talented group of returners who just completed a productive 2021 season for Drury softball. We are looking forward to working with this squad & see what they can achieve and accomplish in 2022 for the Panthers.”

Kristina Bettis was named the NJCAA Regional Pitcher of the Year and a First Team NJCAA All-American pitching for Jefferson College in Missouri in 2021. The 6’2″ right-hander went 20-6 with 22 complete games, fired five no-hitters, and struck out 302 in 167 innings pitched. Bettis posted an earned run average of 1.17 last year.

“Kristina is an experienced pitcher and proven winner who can lead a team in the circle,” said Breaux.

Summer Johnson was the NJCAA Regional Player of the Year for Parkland College in Illinois, was the Mid-West Athletic Conference Player of the Year, and a First Team All-American. She posted a .446 average in 60 games and belted 25 home runs, third-most nationally at the Divison II junior college level. Johnson was the Co-Female Athlete of the Year at Parkland, and her squad went 53-9 and reached the NJCAA D-II World Series.

“Summer is a terrific offensive player who can swing the stick and hit for power and average,” Breaux said.

Wininger joins the Panthers after transferring from NCAA-I Southeast Missouri State, where she saw playing time as a freshman in 2019 and a sophomore in 2020. She was a four-year starter at Johnston City High School and a two-time All-State selection in Illinois. Wininger was named the Most Valuable Player in her conference as a senior and finished her high school career with a .485 average, 38 home runs and 173 runs batted in during her four years.

“She is a strong-arm catcher with great offensive potential,” noted Breaux.

A native of Everett, Washington, Parsley played for Glacier Peak High School before attending Yavapai Community College in Arizona. She hit .404 with nine homers and 33 RBI’s last year on a team that went 33-7 and was in the national semifinals of the NJCAA Division I World Series.

“She is lefty stick who hits for power and average,” said Breaux.

Casey is an NCAA-II transfer from Northwestern Oklahoma State, where she saw limited playing time in 2020 and 2021. She had nine hits in 21 at-bats during the last two seasons to hit .429. Casey played for Beaumont High School in California.

“Joey is an offensive player who can swing the stick from the left side of the plate,” noted Breaux.

Fiene was a First Team All-State selection in Missouri pitching for Concordia High School. The incoming freshman was also named her team’s MVP.

“She’s a right-hander who knows how to pitch,” said Breaux. “Lauren collected more than 500 strikeouts during her high school career.”

Reagan Hight will come to Drury from Elberfeld, Indiana, where she played for Tecumseh High School. A two-time All-State selection in Indiana, she helped her team to a state runner-up finish as a sophomore in 2019. Hight played third base at Tecumseh was recently picked as a First Team All-Conference performer at that position.

“Reagan is a decorated high school player who can swing the stick,” Breaux said.

Olivia’s last name will be familiar to sports fans in the Ozarks as she is the niece of Springfield native and former major league pitcher Scott Bailes. Olivia is from Tucson, Arizona, where she played for Marana High School and saw time at third base and outfield.

“Olivia is a versatile player who can play infield or outfield and possesses good speed,” said Breaux.

Jerry Breaux will enter his fifth year as head coach at Drury and his 29th season as a collegiate head coach. He will start the 2022 campaign with 831 career wins and is one of 16 active coaches in NCAA-II with more than 800 career victories.