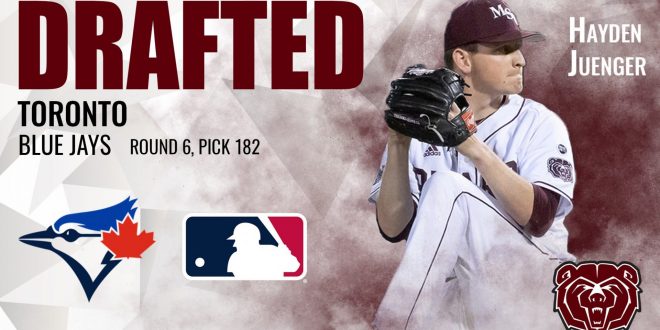 Juenger Selected by Toronto in Sixth Round of MLB Draft

The right-hander from O’Fallon, Ill., served as Missouri State’s closer the past two seasons, picking up 10 saves, including six during his junior campaign in 2021. Juenger tossed 87 innings in 50 career appearances as a Bear, posting a 4.14 ERA and 98 strikeouts with a .249 opponent batting average.

Juenger is the 19th Missouri State player drafted in the first 11 rounds of the draft since 2009. Overall, the Bears have produced 147 players who have gone on to sign professional contracts over their 58 years as a varsity program, including 128 during Keith Guttin’s 39-year tenure as head coach.

The draft concludes Tuesday with rounds 11-20 beginning at 11 a.m. Central. Drafted players have until August 1 to sign with their prospective clubs.