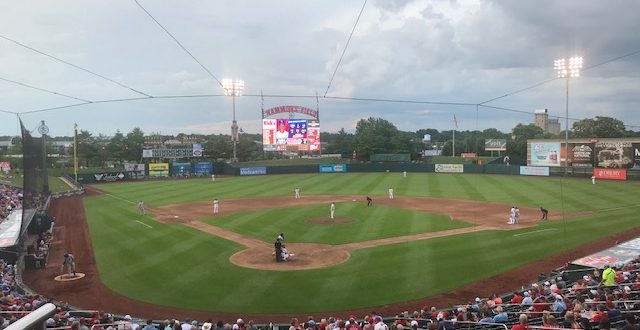 The Northwest Arkansas Naturals banged out 19 runs on 18 hits to beat the Springfield Cardinals 19-4 Tuesday night at Hammons Field.

Ironically, the Cards 9-3 loss to Wichita at Hammons Field back on May 8th set the previous record, which had stood at 3:59 for nearly eight years.

The 15 run defeat ties for the second worst in franchise history, topped only by the 17-1 drubbing against San Antonio June 5th at Hammons Field.

Cardinals pitchers hit six batters and walked 13, tying the club record for free passes first set in 2015 at Arkansas and matched May 15th of this year, also at Arkansas.

The Naturals picked up two runs off Springfield starter Tyler Pike in the 3rd inning, but Springfield scored three of its own in the bottom of the inning to go ahead 3-2.

Ivan Herrera’s RBI single in the bottom of the 4th gave Springfield a 4-2 advantage, but Northwest Arkansas banged out six runs in the 6th inning, seven runs in the 7th, four in the 8th and two more in the 9th.

Robert Garcia (2-0) gets the win in relief for the Naturals.

There were no home runs in the contest.

Springfield drops to 16-32 on the season, while Northwest Arkansas improves to 23-23.

Tuesday’s announced attendance was 3,412, which is the highest so far at Hammons Field this season.

The Naturals and Cards will play a doubleheader on Wednesday, with a pair of seven inning games starting at 5:05 p.m.

Andre Pallante (3-1, 2.57 ERA) is scheduled to pitch the first game of the twinbill for Springfield against Northwest Arkansas’ Austin Cox (0-1, 5.66 ERA).