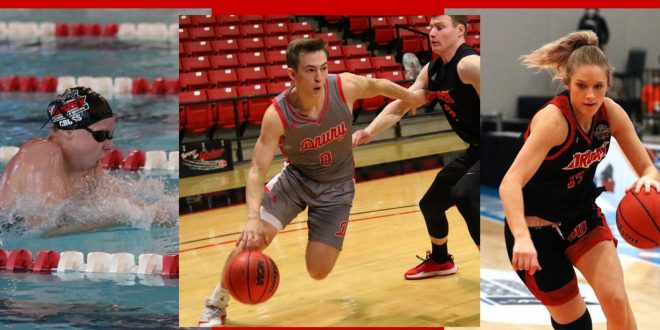 SPRINGFIELD, Mo.— Drury University athletics had three student-athletes named Great Lakes Valley Conference Student-Athlete of the Year in their respective sports for their work in the classroom and in competition during in 2020-21. Conley Garrison was the named GLVC Student-Athlete of the Year in men’s basketball, Paige Robinson won the award in women’s basketball, and Bec Cross won the league’s award for women’s swimming & diving.

Garrison capped his outstanding career as the first Drury men’s basketball player to earn GLVC Scholar-Athlete of the Year since Chris Ijames in 2008. The Bolivar, Mo., native started all 21 games for the Panthers this past winter, averaging 17.3 points and 4.9 assists per contest to lead Drury to the GLVC championship game. The three-time All-GLVC First Team selection was named CoSIDA Academic All-America earlier this spring following his senior campaign, adding to his pair of NABC All-District nods as a sophomore and junior. Garrison finished 11th all-time in scoring at Drury with 1,747 career points and a 3.71 GPA while triple-majoring in Finance, Management, and Marketing.

Robinson is the second straight Drury women’s basketball player to be named GLVC Scholar-Athlete of the Year, following a remarkable junior campaign that includes Ron Lenz D2CCA Player of the Year, WBCA Player of the Year, GLVC Player of the Year, All-Elite Eight Tournament Team, Midwest Regional Most Valuable Player, and GLVC Tournament Most Valuable Player. Robinson also earned CoSIDA Academic All-America honors with a 3.77 semester GPA as a Marketing/Business and Entrepreneurship major while leading the Panthers to an appearance in the DII national championship game. On the court, Robinson averaged 21.1 points and 5.8 rebounds while recording 116 assists, 45 steals, and 28 blocks. Voted GLVC Player of the Week on three occasions, the Bethany, Ill., product ranked nationally in the top 25 in five categories and was one of 11 players who recorded a triple-double in 2020-21.

Following a junior campaign in which Cross was named GLVC Swimmer of the Year and won two national titles, the Canberra, Australia, native is the first GLVC Scholar-Athlete of the Year from Drury since Wai Ting Yu in 2015. Cross claimed three league titles in 200 IM, 400 IM, and 200 breaststroke with national titles in the latter two events and finishing runner-up in the 500 backstroke. Overall, the junior placed in the top five in six events at the national meet to lead the Panthers to a runner-up finish as a team. Cross has posted a 3.92 GPA over her six semesters, majoring in Exercise Physiology/Community Health and Criminology.

Friday’s news from the GLVC is the latest in a series of academic award announcements.