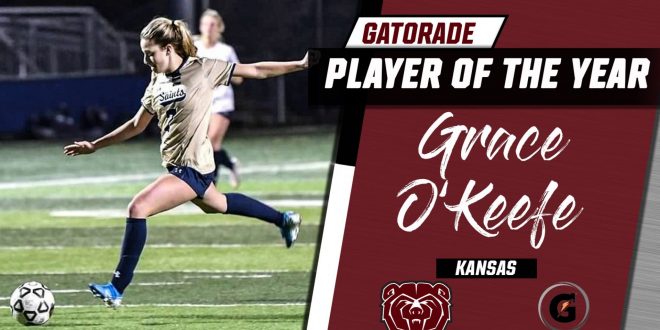 CHICAGO – Incoming Freshman Grace O’Keefe of the Missouri State women’s soccer program was selected as the 2020-21 Kansas Gatorade Player of the Year, the corporation announced Wednesday.

“This is an outstanding honor for Grace,” head coach Rob Brewer said. “This honor reflects the quality of person she is academically and athletically in addition to her service to the community.”

The award, which recognizes not only outstanding athletic excellence, but also high standards of academic achievement and exemplary character demonstrated on and off the field, distinguishes O’Keefe as Kansas best high school girls’ soccer player. Now a finalist for the prestigious Gatorade National Girls Soccer Player of the Year award to be announced in June.

O’Keefe, a 5-foot-8 senior midfielder at St. Thomas Aquinas High School this past season, led the Saints to a 17-4 record and the Class 5A state championship. O’Keefe scored 13 goals and passed for 12 assists, including netting her team’s lone goal in what was ultimately a 2-1 shootout win over Blue Valley Southwest High in the state final. The Eastern Kansas League Forward of the Year, O’Keefe was a 2020 United Soccer Coaches High School All-American selection. She concluded her prep soccer career with 48 goals and 22 assists.

In addition to her success on the field, O’Keefe earned the Presidential Service Award for contributing more than 100 hours of service at Aquinas. She has volunteered locally as a peer tutor and as a youth soccer coach, and she has donated her time to the St. Thomas Aquinas STEM summer camp for kids. In the classroom, O’Keefe has also been impressive, maintaining an A average.

Through Gatorade’s cause marketing platform “Play it Forward,” O’Keefe has the opportunity to award a $1,000 grant to a local or national youth sports organization of their choosing. O’Keefe is also eligible to submit a 30-second video explaining why the organization they chose is deserving of one of twelve $10,000 spotlight grants, which will be announced throughout the year. To date, Gatorade Player of the Year winners’ grants have totaled more than $2.7 million across 1,117 organizations.