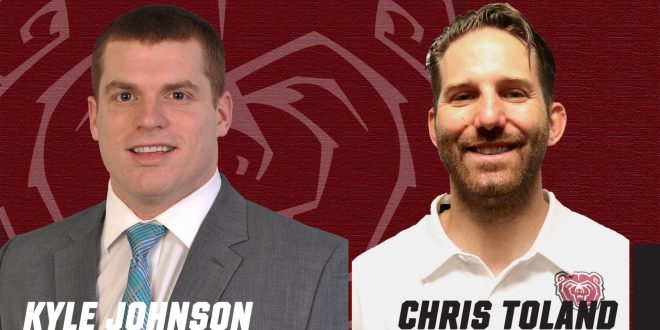 SPRINGFIELD – Missouri State rounded out its strength and conditioning staff for the upcoming season with the summer additions of Chris Toland and Kyle Johnson to the fold.

Toland will work primarily with women’s basketball, while Johnson will handle men’s basketball, in addition to other sports as assigned, coordinating the team workouts and nutritional development.

Toland officially began his duties and June 7 and comes to Missouri State after three-plus years in a similar role at the University of Delaware, where he worked with the Blue Hens’ men’s and women’s basketball, men’s and women’s soccer, volleyball, golf and women’s tennis teams, creating and implementing both in-season and offseason training programs. He also assisted with the Delaware football, men’s lacrosse and track and field teams.

Prior to Delaware, Toland worked with a number of sports in his Olympic Sports Performance Strength and Conditioning internship at Temple University. He has held several similar positions in the private sector as a strength and conditioning coach, fitness coordinator and personal trainer.

Toland earned his bachelor’s in Exercise Science in Kinesiology from Penn State in 2011, and master’s in Sport and Exercise Physiology with a Biomechanics and Motor Learning concentration from West Chester in 2017, and holds NCSA-CSCS, CPR/AED and USA Weightlifting – Level 1 Sport Performance Coach certifications.

“I’m super excited about Chris,” said Lady Bears head coach Amaka Agugua-Hamilton. “His energy and positive attitude is off the charts. He is very knowledgeable, but also always willing to learn, grow, and try new things. He understands the importance of injury prevention, getting in shape, staying in shape, and recovering the body. He stresses the nutrition piece just as much as the physical piece, along with the mental piece. He will be a tremendous mentor and energy giver for our Lady Bears.”

Johnson joined the Bears on June 14 and has spent the past three years at Coastal Carolina University where he served as assistant director of speed, strength and conditioning, working primarily with men’s and women’s basketball in addition to men’s golf. He also assisted with workouts for the CCU football squad during his time in Conway, S.C.

“We are excited Kyle will be joining our staff as our new strength and conditioning coach,” said men’s basketball head coach Dana Ford. “He should fit very nicely with our men’s basketball program and the Missouri State community. KJ comes very highly regarded by his peers, and he will bring instant energy and toughness.”

Johnson replaces Chris Steck, who recently accepted a similar position on the strength and conditioning staff at VMI.

The Toland and Johnson hires are contingent upon formal approval by the Missouri State University Board of Governors at its next scheduled meeting.