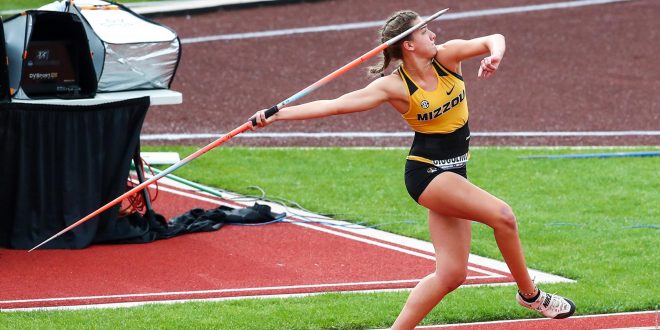 Ciccolini, who holds the Mizzou program record in the event as a true freshman, completed the first round of throws, finishing with a mark of 53.71m (176-2). The throw advanced her into eighth place overall and into the final round. Fighting through injury, Ciccolini withdrew prior to her first throw of the final round, which ultimately dropped her back into ninth place.

Her performance earned the freshman All-America second team honors. She continues the tradition of excellence in the women’s javelin, becoming the second consecutive Mizzou woman to garner All-America honors. Sophia Rivera took home first team honors in the event the last time it was held in 2019.

“Skylar got us off to a great start today and I know her teammates are inspired [by her],” head coach Brett Halter said. “Her performance ranks amongst the gutsiest efforts at an NCAA championship that I have seen in my time at Mizzou.

“A top ten finish and All-American honors given the depth of pain she was in is an amazing accomplishment. Skylar’s grit today will add to an already ferocious competitive armor that she will carry with her into future championships.”

The Tigers will continue the championship meet on Friday with redshirt freshman Mitch Weber (Saint Clair, Minn.) and sophomore Georgi Nachev (Yambol, Bulgaria) competing in the men’s discus and men’s triple jump, respectively. Both events can be streamed on ESPN+.