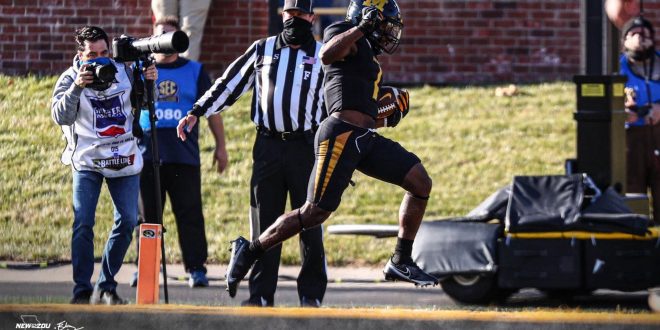 COLUMBIA, Mo. – Mizzou Football had three student-athletes earn CoSIDA Academic All-District honors, as announced Thursday by the organization. This honor recognizes the nation’s top student-athletes for their combined performances on the field and in the classroom.

Current student-athletes Tyler Badie and Blaze Alldredge along with recent NFL draftee Nick Bolton were the three Tigers recognized. Badie and Bolton were named to the District 6 team while Alldredge was named to District 7 for playing for Rice a season ago. First-team Academic All-District honorees advance to the CoSIDA Academic All-America® ballot. First- and second-team Academic All-America® honorees will be announced in early July.

Badie, a Parks, Recreation & Sport major who maintains a 3.80 GPA, will look to become the first 1,000-yard rusher and 1,000-yard receiver in program history this season when he takes over the lead running back duties for the Tigers. The senior tailback enters the season with 1,136 receiving yards and 819 rushing yards.

Bolton, a Parks, Recreation & Sport major with a 3.60 GPA, finished his Mizzou career earning 2020 second-team All-America distinction from six different outlets (Associated Press, The Athletic, The FWAA, the AFCA, Phil Steele and Walter Camp). He was named to the All-SEC first team by the league’s coaches and the AP, was a Butkus Award finalist, a Jason Witten Man of the Year semifinalist and was named to the SEC Community Service Team. On the field, his 67 solo tackles led the conference while his 95 total tackles ranked seventh. He also ranked among the SEC’s Top 15 in tackles per game (9.5, seventh) and tackles-for-loss (8.0, 13th). In addition, he added 2.0 sacks, five pass break-ups and a fumble recovery in 2020.

Alldredge earned a 3.39 GPA as a Political Science major at Rice and has joined the Tigers for the 2021 season. He earned back-to-back Conference-USA first-team selections in 2019 and 2020. He racked up 47 tackles in just five games in 2020 and was graded as Rice’s top pass rusher (69.4).