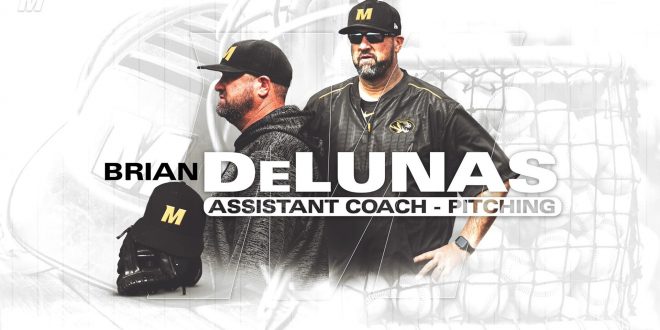 COLUMBIA, Mo. – Mizzou Baseball head coach Steve Bieser has announced the hiring of MLB coaching veteran Brian DeLunas as the Tigers’ pitching coach. DeLunas will return to Mizzou for his second stint on the Tigers’ staff, having served as a volunteer assistant and pitching coach during the 2007-09 seasons.

“I am very happy to announce the hiring of Brian DeLunas,” Bieser said. “Brian has a great reputation in the game as an excellent communicator and has demonstrated great success in developing pitchers for a long time.

“His knowledge and understanding of the game, along with his most recent experience in Major League Baseball is going to be a valuable asset for Mizzou,” he added. “Brian bleeds Black and Gold and his ties to the state and St. Louis area are going to help us recruit the top talent in Missouri.”

During his previous tenure at Mizzou, DeLunas helped the Tigers to three-straight NCAA regional appearances and mentored some of the Tigers’ most successful pitchers in program history including MLB first-round picks Aaron Crow and Kyle Gibson. In his three seasons working with the Mizzou pitching staff, the Tigers posted 116 wins while racking up over 400 strikeouts each year. The 2008 and 2009 pitching staffs produced top five single-season marks with 495 and 492 strikeouts, respectively.

“I am truly excited about the opportunity to come home and be back in the Black and Gold,” DeLunas said. “It’s an honor and a privilege to wear Mizzou across the chest and I look forward to the challenge of returning the pitching program back to the prominence it once held as ‘Pitcher U’.

“There’s no doubt we can get it done with the dedicated guys we have on campus and the future Tigers that are coming,” he continued. “We will all be focused on one goal: giving our absolute best effort to compete for the University of Missouri.”

DeLunas has spent the 2021 season as a special projects coordinator in the New York Mets organization where he worked extensively in pitching development. He spent the previous three seasons with the Seattle Mariners as the bullpen coach and director of pitching development and strategies. During his tenure with the Mariners, DeLunas helped guide star closer Edwin Diaz to his 57-save season in 2018.

A Missouri native, DeLunas is a co-founder of Premier Pitching and Performance in the St. Louis area. Known for his analytical approach and biomechanics focus in pitching, DeLunas helped groom some of baseball’s top prospects, including former Mizzou star and first-round pick Tanner Houck. He has also worked extensively with MLB pitchers, including Jake Odorizzi, David Phelps and Mitch Keller.

“Brian has an in-depth understanding of pitching biomechanics that will surely benefit developing pitchers. He can combine advanced metrics related to pitching and take it to the field to improve young men at the University of Missouri.”

“Coach DeLunas is one of the brightest pitching minds in all of baseball. He has experience developing pitchers at all levels of the game and his track record is off the charts. My three years with him and our staff at Mizzou had a huge impact on my career and where I am today. Coach B has just hired a man who on and off the field is a quality human being, and he is the perfect guy to be leading this pitching staff in the years ahead! Go Tigers!”

“Brian is on the cutting edge of pitching development, but most importantly, he will build relationships with each pitcher on his staff. He will invest his energy into getting the most from each individual pitcher and the pitching staff as a whole.”

“Brian is one of the greatest communicators that I’ve ever been around in this game. He brings an incredible amount of experience with tremendous versatility in his time as a coach. His work in MLB, at Premier Pitching and Performance and Mizzou gives him just the right blend of skills to recruit and develop players at the highest level. This is a hugely impactful hire for coach Bieser and the Tigers.”