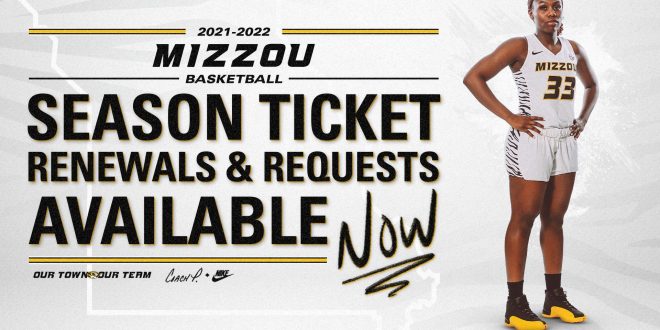 COLUMBIA, Mo. – Mizzou Women’s Basketball season tickets for the upcoming 2021-22 season are now on sale, Mizzou Athletics announced Wednesday. Previous season ticket holders can renew their tickets for the 2021-22 campaign and new season ticket requests can be made by visiting MUTigers.com/WBB22Tix or by calling the Mizzou Ticket Office at 1-800-CAT-PAWS.

The deadline to renew season tickets is Monday, August 9. Mizzou Arena is set to return to 100 percent capacity for the 2021-22 season.

Mizzou will look to build off a WNIT appearance from a season ago, the eighth postseason appearance for the Tigers in 10 seasons under head coach Robin Pingeton. Mizzou returns 93.6 percent of its starting lineup from a season ago, including rising juniors Aijha Blackwell (Berkeley, Mo.) and Hayley Frank (Strafford, Mo.), who continued to blossom in their sophomore campaigns. Blackwell was named to the All-SEC second team and became just the fifth player in program history (first since 1997-98) to average a double-double at 14.5 points and 11.0 rebounds per game. Frank posted the fifth-best individual three-point percentage mark in a season at 45.1 percent (37-of-82) and currently holds the Mizzou career program record for three-point percentage (.409) and free throw percentage (.875).