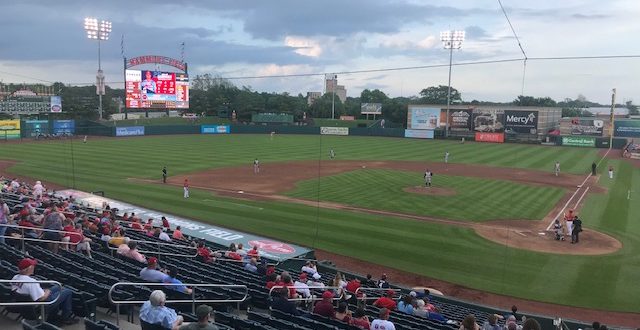 The Springfield Cardinals get a tie-breaking two run single from right fielder Alec Burleson in the bottom of the eighth to beat the Arkansas Travelers 8-6 Tuesday night at Hammons Field.

It’s only the fifth home victory of the season for Springfield, who came into the night with a 4-13 mark at Hammons. The Cardinals improve to 9-21 overall.

Springfield pitchers combined for 18 strikeouts in the contest, one short of the team record of 19, set on May 8, 2009 in a nine inning game against Northwest Arkansas.

The Cardinals jumped out in front early on third baseman Nolan Gorman’s fourth home run of the season, a two run shot to right off Arkansas starter Alejandro Requena.

The Travelers (14-16) followed with a two run blast to left by catcher Brian O’Keefe in the second inning to knot the game 2-2.

Those runs were the first of five given up by Springfield starter Dalton Roach, who threw 90 pitches in 4 2/3 innings, allowing seven hits and striking out seven.

Arkansas hit Roach for more runs in the third inning as O’Keefe went deep again, a two run homer to left that put the Travelers back in front 4-2.

Springfield went ahead 5-4 in the bottom of the fourth on a three run homer by designated hitter Aaron Antonini, his first for the Cards.

The Travelers designated hitter, David Masters, returned the favor in the fifth when he sent a ball over the center field fence to make it a 5-5 contest.

An RBI single by Nick Dunn in the bottom of the fifth untied it, giving Springfield a 6-5 lead.

The back and forth momentum continued in the top of the seventh, as Arkansas’ Jordan Cowan drove in a run on a double to right, knotting the game 6-6.

After Burleson’s big hit put the Cards up by two, Edgar Escobar came in to shut the door in the ninth, working around a base hit and a walk to strike out the side and earn his third save of 2021.

Righty Ramon Santos (2-0) strike out nine hitters, giving up just one run in 3 1/3 innings to pick up the win.

Jack Anderson (0-1) takes the loss in relief for the Travs.