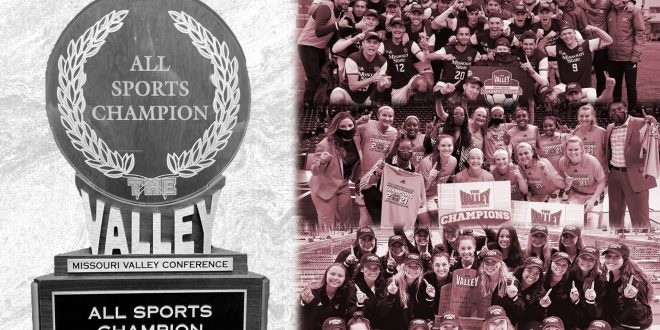 ST. LOUIS – The final calculations are in, and Missouri State has finished second in the Missouri Valley Conference’s All-Sports Trophy competition for the 2020-21 school year.

Missouri State won MVC titles this year in women’s basketball, men’s soccer, and women’s swimming and diving. The Bears were also second in the MVC in women’s tennis and volleyball; while finishing third in men’s basketball and softball.

MSU competes in 14 of the league’s 17 championship sports.

Since joining the Missouri Valley Conference in 1990-91, Missouri State has finished fourth or better in the All-Sports Trophy competition 24 times in 29 years. The Bears have claimed the trophy five times, most recently in 2018. No trophy was presented last year due to the COVID-19 impact on the league’s spring championships.

Finishes in baseball, basketball, soccer, softball, tennis and volleyball are based on regular-season competition. All other sports are determined by finish at the championship tournament or meet.