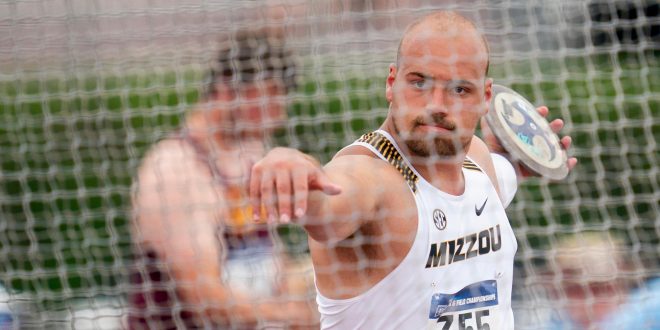 Newcomer of the Year is a special award for the 2021 season provided to athletes who had their freshman seasons cut short by the COVID-19 pandemic. It recognizes individuals who would normally be a sophomore based on eligibility.

Weber catapulted himself onto the national leaderboard in the men’s discus throw, sitting in the top-3 for the event for much of the regular season. His 60.99m (200-1) mark also stands as the second longest throw for the event in school history.

“We are thrilled that the league’s coaches have recognized Mitch’s efforts and performances over the course of the season,” head coach Brett Halter said. “Mitch has been steady throughout the season. I know he is looking forward to the next few weeks of competition.”

The award is the second of the season for the redshirt freshman. Weber took home second place in the discus at the SEC Championships, missing out on a gold medal by just two inches. His performance garnering him All-SEC second team honors.

Weber will represent Mizzou and compete for a national championship in the discus in Eugene, Oregon, after an impressive effort in the preliminary meet where he recovered from two straight fouls to qualify for the national meet.

The Tigers conclude the 2021 outdoor season at the NCAA Outdoor Track & Field Championships from Wednesday, June 9 to Saturday, June 12 in Eugene.