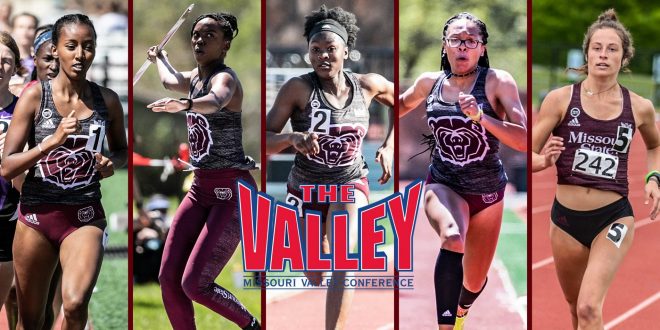 Student-athletes were named to the MVC Scholar-Athlete team by meeting the following criteria and procedures:

Dar (Jr., Toronto, Ontario, Canada) earned a total of four top-8 finishes at the conference meets this season.  She finished seventh in the 800-meter run at the indoor championship and turned in a pair of sixth-place performances in the 800- and 1,500-meter run and anchored the MSU 4×400-meter relay team that placed seventh at the outdoor championship.  Dar carries a 3.50 GPA as a Criminology major.

Henry (So., Clarksville, Tenn.) received the first all-conference honors of her career with a top-3 finish at both championships.  She placed third in the 60-meter dash at the indoor meet before going on to help the Bears capture the gold as part of the winning 4×100-meter relay team at the outdoor competition.  Henry is an Exercise & Movement Science major and owns a 3.62 GPA.

Jenkins (So., St. Louis, Mo.) claimed the long jump title and added a fourth-place outing in the triple jump at the MVC Indoor Championship.  She followed up her excellent indoor performance by coming in fifth in the long jump at the outdoor championship.  Jenkins holds a 3.55 GPA as an Exercise & Movement Science major.

Lacey (So., Wheaton, Mo.) earned her spot on the Scholar-Athlete team after she placed fifth in the heptathlon at the MVC Outdoor Championship.  In her first outdoor league meet, she totaled 4,040 points in the event and contributed to Missouri State’s overall score which finished fourth in the team standings.  As a Psychology major, Lacey maintains a 3.81 GPA.