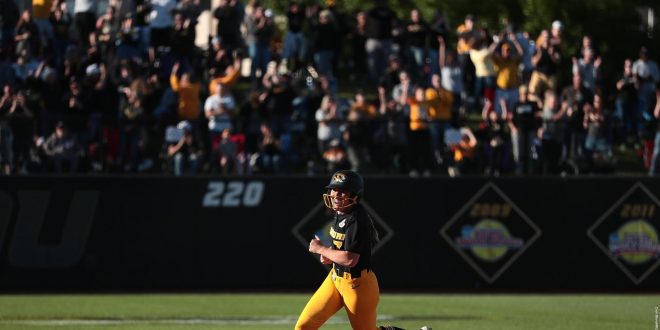 Brooke Wilmes becomes the 25th All-American in Mizzou Softball history. Cayla Kessinger was Mizzou’s last All-American after being named to the Second Team by Softball America after 2020’s shortened season.

Wilmes put together an impressive 2021 campaign for the Tigers, batting .373 with 13 home runs and a team-leading 55 RBI. Her 79 hits were tied for fifth in Mizzou history for a single season and rank among the leaders in Division I. Her season totals in hits, doubles, RBI and runs scored each ranked in the top ten in program history. She also let the team with 17 stolen bases. On the year, she recorded 21 multi-hit games and 14 multi-RBI games.

She started all 59 games in center field while batting leadoff. Earlier this season, Wilmes was named to the Second Team All-SEC and NFCA First Team Southeast All-Region.

Directly following a 0-for-6 start to the season, she joined Rhea Taylor as the only Tigers to record five hits in a contest at Florida State in a 9-5 win (2/13).  Furthermore, Wilmes became the only Tiger to ever reach in 10 consecutive plate appearances after the next two games against Memphis and Iowa State.

She closed the season on a tear, homering in five of six NCAA Tournament games. Her five home runs lead all players in the field through Super Regional play. Wilmes set a new career high with six RBI in a contest against Western Illinois joining Jenna Laird as the only Tigers to reach that mark during the 2021 season (3/24). During that contest, she smashed one of her two grand slams of the season.

In center, Brooke Wilmes had a spectacular season defensively. She recorded six outfield assists, including two in one game at Tennessee (5/7).

Brooke Wilmes became the fourteenth Tiger to reach 200 hits in one season with a double against LSU (4/11). She now stands in ninth in program history with 227 hits. Additionally, Wilmes is third in doubles with 52, fifth with 166 runs, 10th with 130 RBI, tied for 11th in home runs with 27, and she currently sits in fifth with a .354 career batting average.

The Iowan closed the year on a 10-game hitting streak, batting .395 over that time with six home runs and 11 RBI.