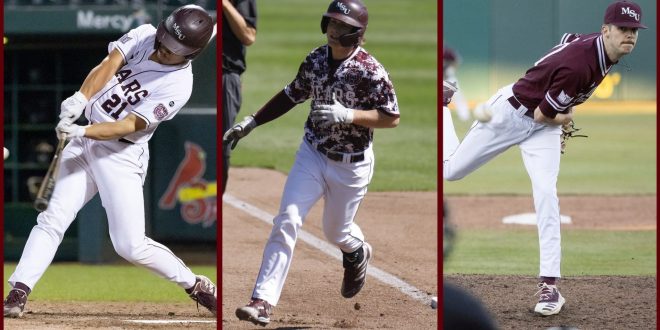 Hull was named the A.E. “Ted” Willis Most Valuable Player in a vote of his teammates, Ziegenbein earned the Dave Dickensheet Outstanding Pitcher Award, and Baldwin is the Danny Cook Rookie of the Year, which included players who lost the majority of their true freshman seasons in 2020 due to the pandemic.

A Missouri Valley Conference Defensive Team member, Hull led the Bears with a .313 batting average this season, hitting two homers and driving in 14 runs. The junior second baseman from Effingham, Ill., Hull took over as the everyday starter in early April and fielded .982 overall and .989 in league games, turning 21 double plays and committing only two errors in 112 chances on the year. Hull also had three walk-off hits, knocking game-winners against Bradley, Indiana State and Valparaiso.

Ziegenbein earned first-team all-MVC honors and ranks among the MVC leaders with 29 appearances and eight wins. The right-hander posted an 8-2 overall record and 3.77 ERA in 57.1 innings, striking out 56 batters with a .250 opponent average. In Valley games, the junior from Blue Springs, Mo., went 6-1 with a 2.22 ERA – second-best in the league – appearing in 14 of the Bears’ 24 games.

A sophomore from Madison, Wis., Baldwin hit .291 on the season with four home runs and 23 RBI as the second-team all-MVC catcher. He increased his average to .308 against MVC pitching with a 1.000 fielding percentage behind the plate in league contests. Baldwin put together a 21-game hit streak from April 3-May 20, the sixth-longest in school history and best since 2010.

Missouri State’s annual team awards are named in honor of three former Bears who made significant contributions to the University’s athletics programs. Ted Willis was an MSU football letterman in 1918, and the Bears’ team MVP award carries his name through a plaque donated by his widow in memory of his long-standing interest and support of MSU athletics. The Bears’ top rookie honor is named for Danny Cook, a standout third baseman for the Bears from 1966 through 1969 who died of leukemia in 1989. Finally, Dave Dickensheet is a Missouri State Athletics Hall of Famer who pitched for the Bears from 1979 through 1982 before succumbing to cancer in 1991.