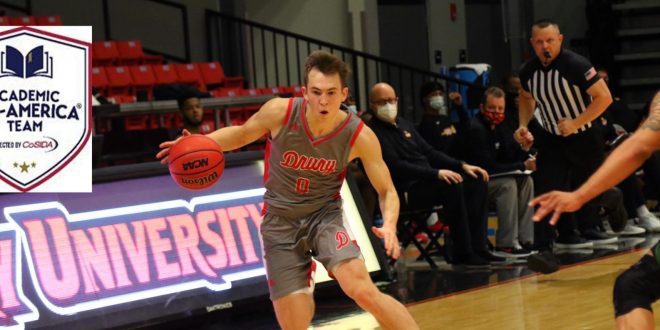 The award recognizes the nation’s top student-athletes for their combined performances on the court and in the classroom, and the Academic All-American teams feature only five players on the First, Second, and Third teams for a total of just 15 players selected for the national honor.

Earlier this year, Garrison was named a First Team All-Great Lakes Valley Conference performer for the third year in a row, and he was also named to the conference’s All-Defensive Team. Garrison also was named to the All-Midwest Region squad for the third straight season by the National Association of Basketball Coaches. He ranked fourth in the GLVC in scoring, averaging 17.3 points per game, and he second in assists, dishing out 5.1 per contest. He ended the regular season leading the GLVC in steals at 2.6 per game; he was third in three-pointers made (2.8), sixth in free throw percentage (.854), and is eighth in three-point percentage (.379). Garrison’s assist-to-turnover ratio is also second-best in the conference at +2.4.

Garrison was named a First Team Academic All-District selection by CoSIDA earlier this month, marking his second career honor for that award. He graduated from Drury earlier this month with degrees in Finance, Management, and Marketing while posting a grade point average of 3.71.

Garrison exists Drury ranked 11th on the program’s all-time scoring list with 1,729 points, his 313 career three-pointers made are the third-most in team history, and he ended his run as a Panther sixth all-time in assists with 488, and sixth in steals with 154.

With this award, Garrison is Drury’s first Academic All-American honoree since 2000, when Matt Miller was honored by CoSIDA.

The Panthers finished the year 11-10 and advanced to the GLVC Tournament championship game for the second time in three years.