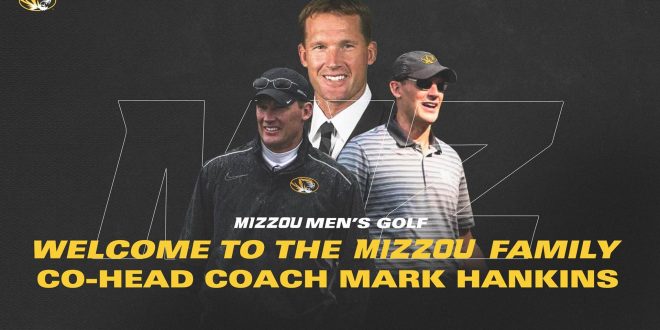 COLUMBIA, MO. — Mizzou Athletic Director Jim Sterk announced Wednesday that Mark Hankins has been named Co-Head Coach of the Mizzou Men’s Golf program alongside longtime coach Mark Leroux. Hankins will take over the reins of the program upon Leroux’s retirement.

“We are thrilled to welcome Mark Hankins as the co-head coach of our men’s golf program and eventual successor to Coach (Mark) Leroux,” said Mizzou Director of Athletics Jim Sterk. “When Coach Leroux brought this idea (of co-head coaches) to my staff back in January, we were intrigued, and then after sitting down with Coach Hankins as he shared his vision for our program, we collectively believed that this move will position Mizzou Men’s Golf for great success in future seasons.

“Coach Hankins is a highly-respected leader in college golf with an outstanding reputation for building championship teams,” Sterk added. “Each of the four programs that he has led enjoyed historical program success under his leadership with consistent NCAA Championship participation. He has tremendous passion for the game of golf and helping young men achieve excellence not only on the course, but in the classroom and community, as well, and we are excited to watch him build upon the foundation that Coach Leroux has worked so hard to establish at Mizzou over the last 17 years.”

“I’m very excited to have Coach Hankins joining our program,” Leroux said “He brings with him a wealth of experience and success as a Division I Head Coach.  I’m confident Mark will have an immediate impact on our team’s success both on the course and in the classroom.  His proven track record and ability to coach at the highest level is unparalleled.  He is the right guy at the right time. Adding Mark to our coaching staff will secure the future of Mizzou Men’s Golf for years to come.”

Hankins’ decorated career spans 19 seasons as a head coach, with stops at the University of Nebraska, Iowa, Michigan State and Texas-Arlington. He has led his squads to 13 NCAA Regional appearances in 19 campaigns at the helm with three trips to the NCAA Championship Finals.

“I’m very excited to join Coach Leroux and the Mizzou Men’s Golf program,” Hankins said. “It is a great opportunity to work with Coach and continue to build on his foundation of success. I also want to thank Athletic Director Jim Sterk and Deputy Athletic Director Nick Joos for their commitment to the golf program and its future.”

Hankins has racked up 33  NCAA DI tournament team titles over his career, developed five PING All-Americans and coached 21 All-Big Ten Conference honorees while earning Big Ten Coach of the Year recognition in both 2005 and 2007.

At Nebraska, in his first season, Hankins guided the 2019 Huskers to their best Big Ten Conference Championship finish in program history. He also captained two fourth-place finishes at the Big Ten Match-Play Championships in 2019 and 2020, also highest finishes in school history.

Prior to his time in Lincoln, Hankins built Iowa into a Top-25 powerhouse, securing 11 tournament titles in seven campaigns. Under his leadership, the Hawkeyes clinched consecutive NCAA Regional berths in his final six seasons. At Iowa, he coached three All-Americans, 16 All-Midwest Region selections, 11 first-team All-Big Ten honorees and seven Academic All-Americans. Under Hankins, the Hawkeyes finished as high as T-10th at the NCAA Finals.

Before leading the Hawkeyes, Hankins revolutionized the Michigan State golf program from 1999 to 2007, resulting in two Big Ten Conference team championships in 2005 and 2007. A two-time Big Ten Coach of the Year with the Spartans, Hankins guided Michigan state to five NCAA Regional appearances and 11 tournament titles.

Hankins is a proven leader on and off the course, having served in athletic administration roles, and on the NCAA Division I Men’s Golf Committee from 2016-2020. He also served as Vice-President and President of the Golf Coaches Association of America from 2006 to 2014. In 2007, he was named the head golf coach of Team USA at the World University Games in Bangkok, Thailand.

Hankins is a two-time graduate of Iowa State University with a BS in Psychology and a Masters in Business Administration.  As a student-athlete, he garnered First Team All-Conference accolades his senior season, GCAA Academic All-American honors, and was a three-time Academic All-Conference performer at Iowa State.

Leroux will wrap up a distinguished career in 2023 that has put Mizzou Men’s Golf back on the map. Leroux secured his 50th career tournament win with Mizzou’s Tiger Invitational victory this past April. His 33 career tournament victories at Mizzou are the most by a coach in program history.

Leroux has steered Mizzou to eight NCAA Regional appearances as a team and led Columbia native Ross Steelman to an individual berth in 2021. Steelman became the fifth Tiger in the past decade to finish T-9 or better at an NCAA Regional with his T-3 performance on May 19.