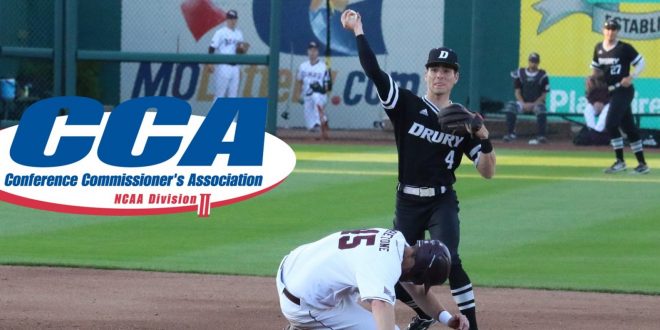 SPRINGFIELD, Mo.– Drury University second baseman Jackson Dierendfeldt was selected to the All-Midwest Region Team by the Division 2 Conference Commissioners Association in a vote of sports information directors and members of the media. The sophomore from Kansas City, Missouri, was named a Second Team all-region pick.

Dierenfeldt led the Panthers in hitting with a .410 average from the lead-off position in Drury’s order. The Staley High School product ended the regular season leading the Great Lakes Valley Conference in runs scored with 50, and his 66 hits were the second-most in the league. He drove in 27 runs in 40 games played while stealing 14 bases. Dierenfeldt ended the season with a 10-game hitting streak and had multi-hit games in seven of those 10 contests. He also earned First Team All-GLVC honors this postseason.

Dierenfeldt is Drury’s second all-region selection this postseason as catcher Nikko Calabro was named to the All-Midwest Region team by the National Collegiate Baseball Writers Association earlier this week.