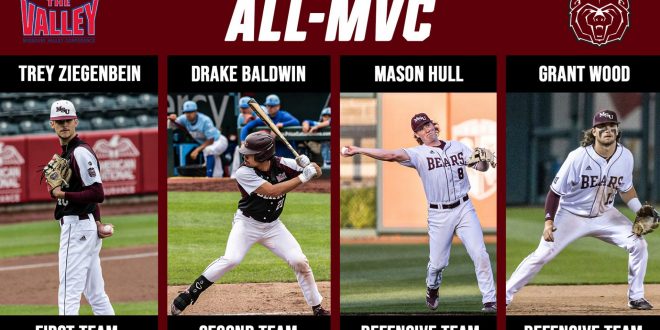 St. LOUIS – Missouri State has four representatives on all-Missouri Valley Conference baseball teams, it was announced by the league on Tuesday. Reliever Trey Ziegenbein made the First Team, Drake Baldwin is the Second Team catcher, and Mason Hull and Grant Wood were selected to the Defensive Team.

A sophomore from Madison, Wis., Baldwin hits .285 on the season with four home runs and 22 RBI, and increased his average to .308 against MVC pitching with a 1.000 fielding percentage behind the plate in league contests. He put together a 21-game hit streak from April 3-May 20, the sixth-longest in school history and best since 2010.

Hull and Wood each committed only one error in league games and anchor an MSU defense that is on pace to set a school record with a .978 fielding percentage, including a .982 mark in Valley games.

A junior second baseman from Effingham, Ill., Hull took over as the everyday starter in early April and is a .982 fielder on the year while turning 21 double plays. He owns a .989 fielding percentage in league play and is MSU’s leading hitter at .330 on the year with two homers, 14 RBI and three walk-off hits.

Wood has started every game this season at third base, turning in a .984 fielding percentage at the hot corner in 24 MVC contests. On the offensive side, the Jefferson City, Mo., native is a .250 hitter with 14 RBI, and ranks second on the team with 30 walks.

The fifth-seeded Bears open MVC Tournament play in a single elimination game with No. 8 Valparaiso tonight at 7 p.m. in Carbondale, Ill.