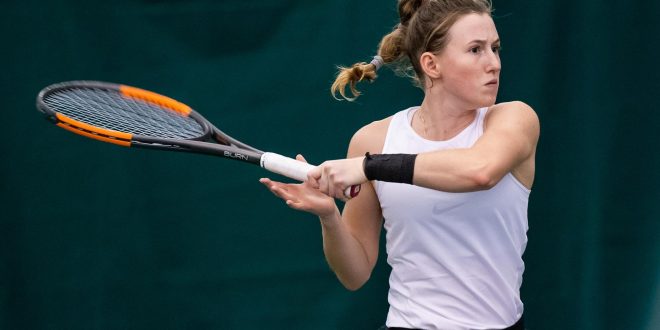 Murgett Falls in Second Round of NCAA Singles Tournament

ORLANDO, Fla. – Mizzou Tennis junior Bronte Murgett (Holmfirth, Great Britain) fell in the second round of the NCAA Singles Tournament on Monday in Orlando, dropping a three-set match to Auburn’s Selin Ovunc, 6-3, 5-7, 2-6. On Monday, Murgett made history by becoming the first individual in program history to win at the NCAA Singles Tournament, defeating Oklahoma State’s Alana Wolfberg, 7-5, 7-5, in first round action.

The loss finishes a historic season for Murgett, who became just the third individual in program history to play in the NCAA Tournament, following Urska Juric (2003) and Bea Machado Santos (2016). She was named to the All-SEC Conference second team on April 29, becoming the fourth Tiger to earn All-SEC honors and the first since Santos was named to the second team in 2017.

In the fall, Murgett became the first ITA regional champion in program history after capturing the singles title at the ITA Central Regional in October, producing a 6-0 record at the tournament. Murgett entered the tournament as the No. 20 seed and defeated the No. 45-, 13-, 29-, 12-, 9- and 7-seeds to capture the title.