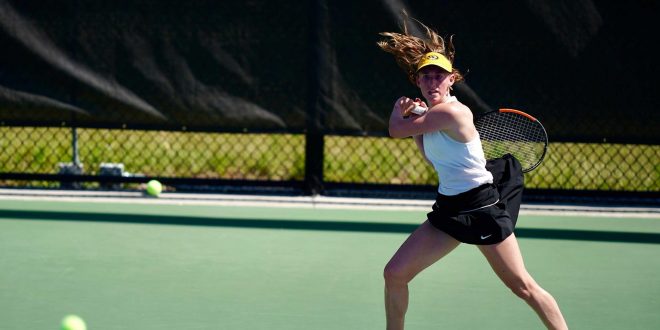 Murgett Victorious in First Round of NCAA Singles Tournament

ORLANDO, Fla. – Mizzou Tennis junior Bronte Murgett (Holmfirth, Great Britain) made history on Sunday in Orlando, as she became the first individual in program history to win at the NCAA Singles Tournament. Murgett defeated Oklahoma State’s Alana Wolfberg, 7-5, 7-5, to advance to the round of 32 on Monday.

Murgett avenged ger January loss to Wolfberg, as the two fought back-and-forth through two sets on Sunday morning at the USTA National Campus. Murgett was able to get the upper hand late in both sets, winning the final two games in both sets after each were tied, 5-5.

In second round action, Murgett will face Auburn’s Selin Ovunc, who defeated Georgia Tech’s Kenya Jones, 7-5, 6-3. It will be the first meeting for the duo. A time for the match will be announced by the tournament at 8 p.m. CT.

Murgett is the first individual in program history to record a victory in the singles portion of the NCAA Tournament, as Urska Juric (2003) and Bea Machado Santos (2016) each fell in the first round.