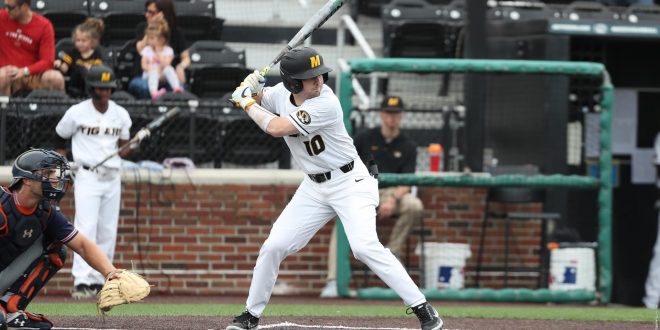 Freshman Zach Hise opened the game strong on the mound for Mizzou, fanning four through his first three innings of work. Hise held Auburn scoreless through the first for frames before Auburn broke through in the fifth inning, scoring three runs on four hits to take the lead.

Sophomore Torin Montgomery put Mizzou on the board in the sixth inning with an RBI-double into the right field corner. Senior Clayton Peterson pulled Mizzou within a run with a one-out, RBI-single to score Montgomery.

Auburn regained the lead in the top of the seventh with a lead-off double and a shallow sac fly. Mizzou would answer back with a four-run seventh to build a 7-4 lead. Redshirt sophomore Luke Mann plated a run with a bases-loaded walk before another Peterson RBI and a groundout plated two more in the inning.

Auburn plated a pair of unearned runs in the eighth to pull within a run, but sophomore Spencer Miles produced a 1-2-3 ninth to earn his first save of the season. Senior Jackson Lancaster (1-0) earned the win in relief.

HEAR FROM THE SKIPPER

“I’m proud of the guys for pulling out a game here, and it’s easy to kind of shut it down whenever you know you’re on your last game and there’s not a whole lot to play for. But, they played for pride, and that’s what we talked about, representing Mizzou and going out winners and they were able to come through today and I’m very proud of them.”