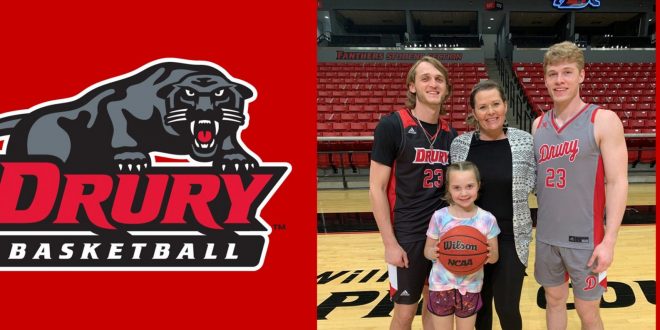 SPRINGFIELD, Mo.— Drury University’s new men’s basketball coach Chris Foster has formally announced his first two signees for the 2021-22 season as Clay Gayman and Dalton Gayman will transfer to the program next year.

The brothers are both from Nevada, Missouri, and Clay will arrive from NCAA-I Abilene Christian, while Dalton comes to Springfield from Arkansas-Ft. Smith at the NCAA-II level.

Clay Gayman was a part of an Abilene Christian team that went 24-5, and defeated Texas 53-52 in the NCAA Tournament. ACU was knocked out a round later by a UCLA team that reached the Final Four. Gayman, who will be a junior in eligibility for the Panthers, averaged 8.2 points while playing in 26 games. He contributed 3.3 rebounds per game, and the 6’6″, 220-pound forward shot 41 percent from the field, 87 percent from the free-throw line. Gayman averaged 9.5 points and scored in double-digits 16 times during his sophomore season in 2019-20. At Nevada High School, he was a four-year starter for the varsity averaging 20.1 points and 11.3 rebounds. He was the Joplin Globe Area Player of the Year as a junior and a senior and was a two-time Class 4 All-State selection.

“Clay has a unique combination of size and skill that will be a great fit in our motion offense,” said Foster. “He also will provide leadership and experience to our young roster.”

Dalton Gayman played in all 16 of Arkansas-Fort Smith’s games last year but will still have all four years of eligibility
remaining as he transfers to Drury. The 6’6″, 215-pound guard averaged 1.6 points and 2.4 rebounds for the Lions in 2020-21. Two seasons ago at Nevada, Dalton led the Tigers to a 22-4 record while averaging 21.4 points and 8.4 rebounds. He was the Player of the Year in the Big Eight Conference and was named to the All-State squad in Class 4.

“Dalton is a physical player that has the versatility to play multiple positions,” noted Foster. “We are excited about what he will bring to our program over the next four years.

“We are thrilled to add Clay and Dalton to the Drury Basketball family.”

Foster will enter his first season as the Panthers head coach in 2020-21. He was the head coach at McKendree for the previous three seasons and led the program at Truman State from 2013-18. Drury finished last season 12-11 and reached the finals of the Great Lakes Valley Conference tournament.

Drury basketball plans to announce additional signings in the next several days.