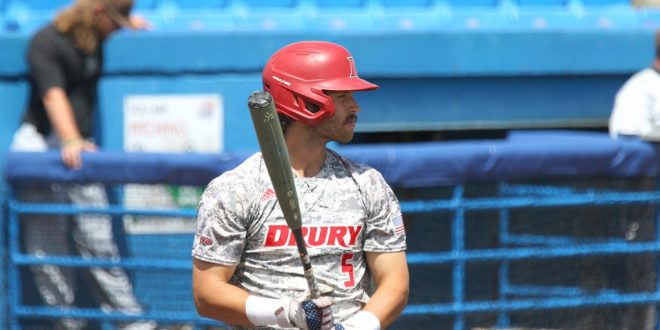 BOLIVAR, Mo.— Southwest Baptist thwarted a game one rally by Drury, then shut out the Panthers in game two to pull off a doubleheader sweep at Dodson Field in Bolivar, Missouri, on Friday.

The Panthers were down to their final out in the seventh inning of game one but fought back with four runs to forge a tie, only to have Southwest Baptist win the game in the bottom of the seventh.

Trailing 9-5 going into the seventh, Drury pulled within two runs of the lead when Jacob Mitchell drove in a pair of runs with a single. Then Bayler Hinz evened the score at 9-9 on a two-run home run.

The Bearcats, however, took the game as Zack Ehlen drew a bases-loaded walk to win game one of the doubleheader. Drew Wagner (2-4) got the win in relief for SBU, while Colby Childs (1-2) came out of the bullpen to take the loss for DU.

The loss also wasted an early Drury lead as the Panthers scored four runs in the first inning, highlighted by a three-run homer by Nikko Calabro. Calabro belted a pair of home runs in the game and finished the contest going 3 for 4 with two runs and four runs batted in.

SBU starting pitcher Ryan Carmack improved to 6-0 as he fired six shutout innings while holding the Panthers to two hits with four walks and six strikeouts.

The Bearcats scored a run in the first and added a pair of runs in the third and fourth innings to build a 5-0 lead.

Jackson Dierenfeldt had two of Drury’s four hits in the game as he went 2 for 4 in the game. The Panthers stranded eight runners in the loss. Hunter Becker (1-5) took the loss for Drury.

The two teams conclude their four-game series and the 2021 season on Saturday at noon in Bolivar.