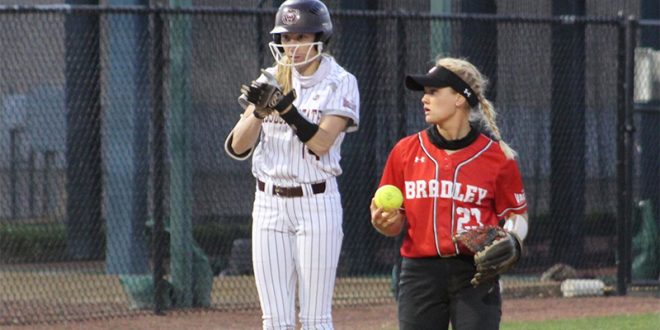 Daphne Plummer flirted with a cycle and went a perfect 4-for-4 at the plate to boost third-seeded Missouri State to a 6-4 victory Bradley that advanced the Bears to the Missouri Valley Conference Tournament semifinals here Thursday night at Cooper Stadium.

Missouri State (26-16) outhit the Braves, 8-5 with half of them going for extra bases while Plummer racked up two singles, a double and a triple to fall a home run shy of the cycle.

After erasing two separate one-run deficits in the first three innings to keep the game level at 2-2, MSU broke open with a four-run fourth highlighted by a bases-clearing hit from Plummer.

No. 6 seed Bradley (20-22) chipped away at the Bears lead in the fifth and sixth, but Steffany Dickerson slammed the door shut by striking out three batters of a four-out save for the senior hurler.

Madison Hunsaker (10-4) pitched four innings to earn her 10th win of the season while Gracie Johnston came in ahead of Dickerson for 1.2 innings of action to make for a three-headed Bears attack that allowed three earned runs and totaled six strikeouts.

The Braves opened the game with a run in the top of the first as Taise Thompson sent a ball to the left-field wall that scored a runner from first to put Bradley up 1-0.

Plummer sparked the first Bears response in the bottom half of the opening frame as she led off with a double to the gap in right center.  After Skyler Shaw followed with a walk, MSU flexed its reputation on the base paths as Shaw swiped second to prompt an errant throw that allowed Plummer to race home and draw the game even.

Things didn’t break right for the Bears in the top of the third as a Vicki Zaluske bunt stopped spinning while still in fair territory and allowed the Braves to get runners at the corner.  Later, a bloop single from Stacia Seeton with the bases loaded gave the Bradley another one-run advantage.

However, Plummer had the answer yet again as she smacked her second leadoff extra-base hit in as many innings with this one resulting in her fifth triple of the season.  Darian Frost came through with a two-out RBI single as her liner fell safely to the grass in right field and brought Plummer home for MSU’s second equalizer.

Hunsaker opened up the decisive bottom of the fourth with a single and pinch-runner Bailey Greenlee came around to score later in the inning following a BU error.

Then, Plummer registered her third straight hit with a single to the outfield that slipped under the glove of the centerfielder and allowed the speedy shortstop and both runners in front of her to score on a pseudo inside-the-park home run that catapulted the Bears to a 6-2 lead.

With the Braves looking to add to their two unanswered runs, the hot-handed Dickerson picked up three quick outs in the top of the seventh with the final two coming via strikeouts to seal the third-round win for the Bears.

Bradley’s Camryn Schaller (5-5) was tagged for the loss, but was hindered by four Braves miscues that led to four of the runs going down as unearned.

Olivia Krehbiel and Kelly Metter each recorded doubles to join Plummer with the extra-base hits for MSU.  Frost’s RBI was her 20th of the season.

Missouri State advances to MVC Tournament semifinals for the second time in the past three tournaments and will go up against a Panthers squad that the Bears beat twice in a three-game set back on March 20-21 in Springfield.