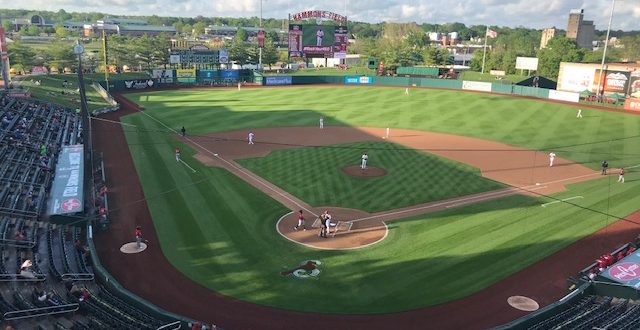 Springfield Cardinals baseball made a return to Hammons Field after a 610 day absence Tuesday night, and while so many things were different, the sights, sounds and smells of the ballpark made many in attendance feel as if they’d never left.

After a day long cold rain, the sun came out at the ballpark, just prior to first pitch, and the 2021 Springfield Cardinals season was underway.

The Wichita Wind Surge scored a pair of runs in the 8th inning to shutout the Cardinals 2-0.

Springfield (0-1) nearly broke a scoreless deadlock in the seventh.

With two out, designated hitter Juan Yepez doubled to right.

Left fielder Nick Plummer hit a sharp single to left, with Yepez gunned down at the plate on a throw from Aaron Whitefield.

The Wind Surge (1-0) got to Springfield reliever Dalton Roach in the eighth inning.

With one out, first baseman Damek Tomscha got an infield single, then went to second on a base hit by Jose Miranda.

After shortstop Jermaine Palacios flied to right, Wichita got back to back run scoring singles from designated hitter Mark Contreras and first baseman Andrew Bechtold to take a 2-0 lead.

Righthanded reliever Tom Hackimer (1-0) pitched two scoreless innings to pick up the win, with Roach (0-1) picking up the loss, giving up two runs on five hits in three innings.

Yennier Cano pitched the ninth, allowing just a hit to Luken Baker and striking out two to earn the save.