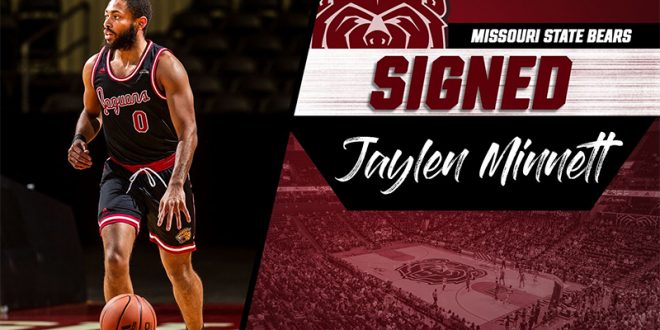 Minnett, a 6-foot-1, 180-pounder, is a transfer from IUPUI in Indianapolis where he played in 111 games for the Jaguars over the last four seasons and scored 1,403 points (12.6 ppg) with 285 3-pointers made. He is IUPUI’s career and season record holder for 3-point field goals and ninth all-time in program history in scoring.

“Jaylen is an experienced, dynamic scoring guard that will allow us to play an even more up-tempo, aggressive style on both the offensive and defensive sides of the floor,” said Ford who enters his fourth season at Missouri State. “His versatility and shooting ability allows for us to play him with anyone at any time.”

His junior year in 2019-20, he scored in double figures in 27-of-32 games, including 31 starts, and produced 16.6 points per game with 115 three-pointers and 110 assists. He was named Horizon League Sixth Man of the Year as a sophomore after scoring 12.0 points and knocking down 78 triples in just 23.9 minutes per game.

His performance as a freshman in 2017-18 included 7.1 points per game with 51 three-pointers, the most by any IUPUI freshman in the program’s Division I era.

Minnett holds the distinction of having the fifth-longest streak in NCAA history of consecutive games with at least one 3-pointer (69). He also scored his 1000th career point against Green Bay on Feb. 6, 2020 with a career-high 32 points and eight 3-pointers in that contest.

His career at IUPUI included 69 double-figure scoring games, 18 games of 20 points and three games with 30 points or more.

The Bears are coming off a 17-7 campaign in which they finished third in the Missouri Valley Conference. MSU returns 90 percent of its scoring and 92 percent of its rebounding with all five starters returning for the upcoming season.