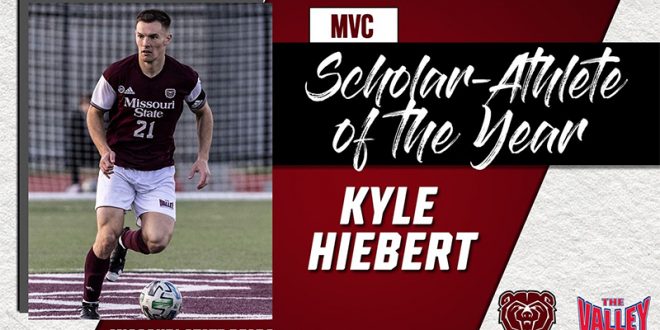 Additionally, Jack Denton received honorable mention status as a total of 15 student-athletes were recognized on the conference academic list.

It marks the second straight year Hiebert (Sr., La Salle, Manitoba, Canada) has earned Scholar-Athlete of the Year recognition after being awarded the honor in 2019.  He was also selected as MVC Defensive Player of the Year for the second consecutive season after helping lead Missouri State to regular-season and tournament MVC titles.  As a four-year starter for the Bears, the captain has started 66 straight matches, including all 12 of the 2020-21 campaign, and has played a key role for an MSU defense that has recorded six shutouts this season.  Hiebert carries a 4.0 GPA and is currently pursuing a master’s degree in Accounting.

Bruseth (Jr., Batnfjordsøra, Norway) turned in an excellent junior season on his way to adding scholar-athlete honors to go along with his All-MVC first team nod.  He finished third in the conference with 13 points after tallying four goals and five assists.  The Norwegian forward posted a three-assist performance against Drake on March 22 before going on to score a goal in the next three matches.  He holds a 3.33 GPA in Sport Administration.

Making his third consecutive scholar-athlete team, Creek (Sr., St. Louis, Mo.) continued his reign as an elite enforcer in goal for the Bears.  He made all 12 keeper starts and logged 1077:59 minutes while registering a league-best .584 goals against average.  The St. Louis native earned six clean sheets to increase his career total to 19 shutouts which ranks fourth on the program’s all-time list.  Creek is majoring in Business Administration and boasts a 3.98 GPA.

The MVC’s Forward of the Year, Mulatero (Jr., Givoletto, Italy), finished as the league-leader in points (22), goals (7), assists (8), and game-winning goals (3).  He recorded a pair of multi-goal games against Drake (March 22) and Evansville (March 30) before going on to receive Most Valuable Player honors in MSU’s championship run at the MVC Tournament.  As an Economics major, Mulatero owns a 3.59 GPA.

Yari (So., Manchester, England) started all 12 matches in the Bears midfield this season where he saw 1,006 minutes of action.  He scored his first career goal in noteworthy fashion with a game-winner in the final minute of a 1-0 overtime victory at Bradley on March 18.  Yari was a first team All-MVC selection this year, following up a 2019 debut season where he was named to the All-Freshman team.  He carries a 3.96 GPA as an Economics major.

Denton (Jr., London, England) collected his second consecutive All-MVC second team laurels after he started 10 matches this year.  Missing the first two games after recovering from an offseason injury, he went on to play a dynamic role for MSU after he saw time both in the defensive midfield and at center back.  He notched his first points of his junior campaign with an assist at Loyola (March 26) before scoring the game-winning goal at Central Arkansas (April 3).  Denton is an Exercise & Movement Science major and boasts a 3.88 GPA.

The criteria for the all-MVC honor parallels the CoSIDA (College Sports Information Directors of America) standards for Academic All-America voting. Nominees must be starters or important reserves with at least a 3.30 cumulative grade-point average (on a 4.00 scale). Also, students must have participated in at least 75 percent of the regular season matches or played in the league tournament. Student-athletes must have reached sophomore athletic and academic standing at their institution (true freshmen and redshirt freshmen are not eligible) and must have completed at least one full academic year at their institution.

Missouri State is making its second straight – and fifth overall – trip to the NCAA Men’s Soccer Tournament with a second-round matchup against Maryland on May 2 at 12 p.m.